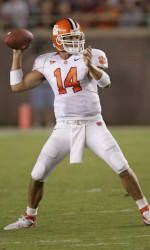 Will Proctor Featured on the ACC’s Plugged In

GREENSBORO, N.C. – Will Proctor calls this his “one-and-done” football season.

The fifth-year Clemson senior is finally getting his chance to run the Clemson offense. He spent four years watching Charlie Whitehurst, one of the best quarterbacks in Tiger history, direct the show.

With Whitehurst graduated and gone to the San Diego Chargers, Proctor wasn’t about to waste his opportunity.

“This off-season, I made sure my work ethic was second to none,” Proctor said, “because there’s no tomorrow. That makes the wins sweeter and the losses harder.”

So far, there’s been much more sweetness than hardness to the season. Proctor has led the Tigers to a 4-1 record and No. 15 national ranking heading into Saturday’s crucial game against Wake Forest at noon…