Will Brown – All About the Moment

Note: The following appears in the UConn football gameday program.

For Will Brown, the Clemson Family has been a part of his life for as long as he can remember. The wide receiver’s knowledge of Clemson’s culture came long before he stepped foot on campus to begin his undergraduate career in 2017. With both parents being Clemson alumni and his late grandfather a lifelong fan, Brown grew up loving the Tigers and traveling to watch games in Death Valley.

“After years of watching Coach (Dabo) Swinney and the players run down the Hill, watching him build the program and seeing big plays in Death Valley, it stirred something in me, and I wanted to be a part of it.”

Growing up in the Upstate, Brown lettered at Boiling Springs High School before becoming a walk-on for the Tigers. By his side was always his greatest supporter, his grandfather, Johnny Babb. Brown is thankful to be living out his dream of playing football at Clemson and knows his grandfather is cheering him on every day.

Brown describes the transition of watching players run down the Hill to now being one of the players running down the Hill as “absolutely electric,” and he thanks God for the opportunities he has been given.

“Sometimes I have to sit back and remind myself that this is what I prayed for, and this was my dream all along.”

However, his five-year tenure at Clemson has not always been an easy ride. As a walk-on, Brown has been challenged by his coaches to grind, even when he thought he might not have it in him. He has been pushed every day to practice as a wide receiver against some of the best defensive players to go through the program, such as Andrew Booth Jr., Isaiah Simmons and A.J. Terrell. The constant grind has been challenging at times.

Describing the program as a “blue-collar program where everyone puts their head down and goes to work,” Brown continues to make sure he soaks up every moment of his journey and uses it to constantly grow. But most importantly, he has described his Clemson journey as “crazy and fun.”

The South Carolina native recalled his evolution in the program.

“I was fortunate enough to be put on scholarship after my junior year. I spent three years doing everything that I could for Coach (Brent) Venables (on the scout team) and making sure that I prepared the defense as much as possible for the opponent that we were playing. So, I committed to doing that and worked as hard as I possibly could, and I was fortunate enough to get an opportunity to work with the offense over the past three years. I have prepared week in and week out just in case there was an opportunity.”

Brown made sure to highlight a quote from Swinney that has stayed with him throughout his time.

One of those opportunities included his favorite memory at Clemson…being a part of the 2018 national title squad and visiting the White House. Now, in the 2021 season, he has played multiple snaps as the punt returner and is locked into capitalizing on the opportunity to be on the field, including as a reserve wideout during crucial situations.

Outside of football, #82 has focused on excelling in the classroom. The four-time ACC Academic Honor Roll member completed his undergraduate degree in health science in 2020 and is on track to complete his master’s degree in business administration in December. He has never lost sight of his academics, even with the hard work he has dedicated to the program.

“Being able to say that I’m an alumnus of Clemson University means a lot to me. Clemson football does a great job of putting the emphasis on getting your degree first. I didn’t know how well football would work out or how long I would go or if I would end up playing or not, but I always knew that I could control how well I did in school and the dedication and the hard work I put into that.

“Coach Swinney always says, ‘How you do anything is how you do everything.’ And for me, I wanted to always put my best foot forward when it came to my schoolwork. I wanted to always apply myself and make sure that the team knew I was not only going to be a guy that would work hard on the field, but also off the field and in school.”

Brown also represents Clemson football as a P.A.W. Journey ambassador. He highlights P.A.W. Journey as the aspect of Clemson’s program that separates the Tigers from every other program. He loves how the program allows players to find what they are good at outside of football and lays a foundation for these student-athletes to not be one dimensional in their lives. He highlighted P.A.W. Journey’s New York Business Week as his best experience with the group.

After his time at Clemson, Brown will continue to strive to make a difference in people’s lives. He hopes to use his passion for people to become a world leader in health care. 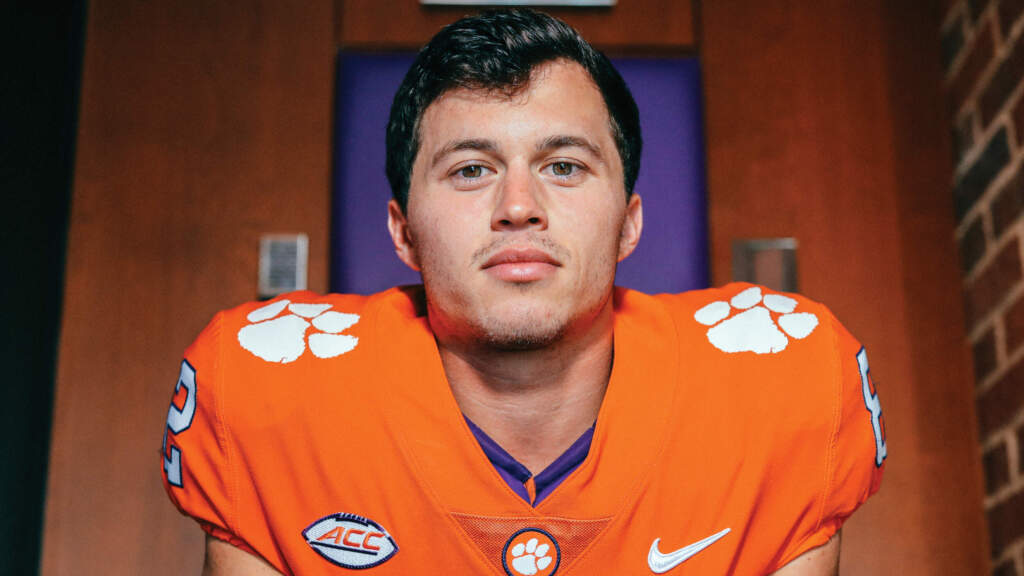