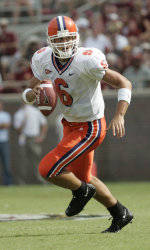 Whitehurst to Compete in All-Star Challenge

Chicago, IL – Former Clemson quarterback Charlie Whitehurst will be one of 12 future NFL players who will compete in the ninth annual Capital One Presents the College Football All-Star Challenge. This year’s competition will air on ESPN during Super Bowl Weekend and will be shown Saturday, February 4th at 4:00 PM EST.

Whitehurst is the first Clemson player to take part in the event. He was Clemson’s starting quarterback for four seasons and led the Tigers to 25 victories, second best in Clemson history. He established 46 Clemson records in his career, including career marks for completion percentage, completions, passing yards and total offense.

There will three divisions of competitors: quarterbacks, receivers/running backs and kickers. The kickers competition is new to this year’s event. Stephen Gostkowski of Memphis, Connor Hughes of Virginia, Josh Huston of Ohio State and David Pino of Texas are the inaugural field.

Additional competitors will be announced later this week.

Whitehurst will play in the Senior Bowl this coming Saturday. He will be joined by former Clemson All-American Tye Hill.