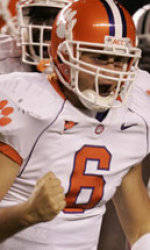 Whitehurst Taken in Third round of NFL Draft

Clemson, SC- Clemson graduate Charlie Whitehurst was selected in the third round of the NFL draft by the San Diego Chargers on Saturday evening. He was the 81st selection of the draft. Here are some notes on his selection:

Whitehurst is the first Clemson quarterback to be drafted sincethe 1979 draft when Steve Fuller was a first round pick of theKansas City Chiefs. Patrick Sapp played quarterback at Clemson forhis first three seasons, but played outside linebacker as a seniorin 1995. He was a second round pick, the 50th selection of the 1996draft, ironically, by the San Diego Chargers. Sapp playedlinebacker his entire NFL career, including two years with theChargers. Whitehurst will now be a teammate of former NC Statequarterback Philip Rivers, who played for the Pack from 2000-03.Rivers ranks first in ACC history in career passing yards (13,484),and is first in career completions (1087), while Whitehurst isthird in both areas. Whitehurst is third in passing yards with9,665 and in completions with 817. Whitehurst and Rivers havesomething in common. They are the only quarterbacks in ACC historyto beat Florida State twice. (Florida State joined the ACC in1992). Rivers was 2-2 in his career as a starter against theSeminoles, while Whitehurst was 2-1, including a 35-14 victory onhis Senior Day this past season. Whitehurst and Rivers were theopposing starting quarterbacks in a game just once, in Raleigh in2003. With two of the top three quarterbacks in ACC history interms of passing yardage competing in the same game you would thinkit was a high scoring affair. But, it was not, as the Pack beatClemson 17-15 in a nationally televised Thursday evening game onESPN. Whitehurst was 23-37 for 196 yards passing that night, hisfewest passing yards in an ACC game that year. Rivers was 20-34 for213 yards, his low passing yardage total that season against an ACCteam. Whitehurst is the second member of his family to be draftedinto the NFL. His father, David Whitehurst was an eighth roundselection, the 206th pick of the 1977 NFL draft by the Green BayPackers. David Whitehurst played seven years in the NFL, all forthe Packers, between 1977-83. Charlie was actually born in GreenBay on August 6, 1982, as David was going through preseason campfor the Packers just prior to his sixth season in the NFL. Fullerwas drafted on April 29, just two days after his father’s birthday(April 27). His father was drafted on May 4, 1977. Whitehurst isthe first former Tiger drafted by the Chargers since the 2001 draftwhen Robert Carswell was a seventh-round pick as a free safety.Whitehurst will attempt to be the first former Tiger to play forthe Chargers since Adrian Dingle, who was a starting defensive endfor San Diego between 1999-04. The last time a former Clemsonquarterback was on an NFL roster as a quarterback was 1988 whenSteve Fuller was on the roster of the San Diego Chargers. Fullerdid not play in a game that year, but was on the active roster.Former Clemson quarterback Woody Dantzler played in the NFL in2002-04, but he was never a quarterback. He was a running back,receiver and kickoff returner. A former Clemson quarterback has notthrown a pass in an NFL game from the quarterback position sinceFuller threw 64 passes for the Chicago Bears in 1986.