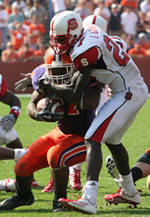 OFFENSIVE BACK Clemson quarterback Charlie Whitehurst completed 19 of 27 passes for 307 yards and two touchdowns in Clemson’s 37-7 win over Temple on Saturday. The senior from Duluth, Ga., had 300 yards of total offense on the day and guided Clemson to a 514-yard day as a team, Clemson’s highest total in 19 games. Whitehurst had a passing efficiency rating of 182, his highest of the season. In the first half, he became the school’s career total offense leader when he completed a 32-yard pass, and he finished the game with 8,959 yards of total offense for his career.

OFFENSIVE LINE North Carolina offensive tackle Brian Chacos was the top performer on an offensive line that paved the way for the Tar Heels’ season-high 172 rushing yards in a 7-5 victory over No. 23 Virginia on Saturday. Chacos, a senior from Darien, Conn., graded out at 86 percent and had 10 knockdown blocks. Chacos also recovered a North Carolina fumble and carried it five yards before being knocked out of bounds.

DEFENSIVE LINE Virginia Tech inside linebacker Vince Hall posted a team-best 14 tackles, including a sack, and a pass break up in the Hokies’ 28-9 win at Maryland on Thursday. The sophomore from Chesapeake, Va., anchored a defense that held Maryland to just 254 yards of total offense.

DEFENSIVE BACK Wake Forest cornerback Alphonso Smith finished with six tackles, two for loss, a sack and an interception in the Demon Deacons’ 27-19 win over NC State on Saturday. The freshman from Pahokee, Fla., returned his interception for a touchdown late in the third quarter and also made the tackle on the Wolfpack’s fake punt attempt with less than three minutes remaining in the game. Earlier in the game, Smith returned a punt 22 yards on a reverse, Wake Forest’s longest punt return of the season. Smith leads the ACC in passes defended with 11.

SPECIAL TEAMS Wake Forest punter Ryan Plackemeier punted eight times for 410 yards, averaging 51.2 yards per kick and a net of 45.3 in the Demon Deacons’ 27-19 win over NC State on Saturday. In the fourth quarter, Plackemeier pinned NC State with a school-record 82-yard blast. The Bonsall, Calif., senior’s punt was the fourth-longest in ACC history, and the longest since 1989. Plackemeier also had punts of 71 and 56 yards. Already the ACC’s all-time leading punter, Plackemeier became the NCAA’s all-time leading punter with at least 200 attempts. He improved his career average per kick to 44.9, surpassing Shane Lechler, formerly of Texas A&M and Ray Guy, formerly of Southern Miss.

ROOKIE Florida State wide receiver Greg Carr caught six passes for 95 yards and three touchdowns in the Seminoles’ 55-24 win over Duke on Saturday. The Reddick, Fla., freshman had scoring two scoring catches of 12 yards and one of 25, and leads the ACC with eight TD catches on the season. Carr is averaging 69.2 receiving yards per game and eight of his 18 receptions have been for touchdowns.