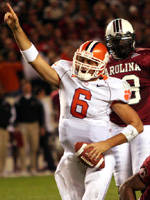 Clemson quarterback Charlie Whitehurst received a good report about his right shoulder from noted orthopedic surgeon Dr. James Andrews of Birmingham, AL on Monday. Clemson’s starting quarterback was told the best course of action was rest and rehabilitation, not surgery.

Dr. Andrews’s diagnosis confirmed the findings by Clemson doctors throughout this season. Whitehurst had an MRI on Monday in Birmingham and like the results earlier at Clemson, it did not show any structural damage.

“I will take a couple of weeks off, then rehab, so I should be ready to go for a bowl game,” said Whitehurst, who has had discomfort with his throwing shoulder since the Boston College game in the fourth game of the season. He missed just one game, the Duke game on November 5, which broke his record setting streak of 37 consecutive starts.

Whitehurst returned to defeat Florida State on November 12 and South Carolina a week later, making him the only starting quarterback in college football history to defeat Bobby Bowden and Steve Spurrier coached teams on consecutive Saturdays. The win over South Carolina was his fourth in four starts against the Gamecocks, making him the first quarterback in the 103-game history of the rivalry to post a perfect 4-0 record.

Whitehurst holds 40 Clemson records, including standards for most yards passing, most completions and most touchdown passes. He is fifth in ACC history in passing yardage with 9,460. He has led Clemson to 24 victories as the starting quarterback since 2002, tied for second in Clemson history with Nealon Greene.

“We are very pleased with this report,” said Head Coach Charlie Whitehurst has been a great ambassador for Clemson University and college football.”