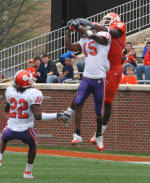 Sergio Gilliam had three interceptions and C.J. Gaddis added a theft that he returned 35 yards for a touchdown to lead the White team to a 24-14 win over the Orange in Clemson’s annual Spring Football Game at Death Valley. The contest that was played in front of 17,500 fans, concluded the Spring Practice session for Tommy Bowden’s Tigers.

“I liked the competitive atmosphere we had today and as long as we have the depth, I would like to continue to divide the teams for the spring game in the future,” said Bowden.

Clemson returns 47 lettermen and 15 of the 22 starters for the 2006 season. Some of the Tiger regulars did not play today, including starting wide receivers Aaron Kelly and Chansi Stuckey, who both missed the game due to injury. Stuckey led the ACC in receptions last year with 64, while Kelly added 47, the second highest figure in Clemson history by a freshman.

There were no injuries reported from the game. Offensive guard Brandon Pilgrim missed the game due to an auto accident involving his parents and grandparents prior to the game.

The defenses dominated most of the contest as the two teams combined for 380 yards in the 48-minute game. The White defense had five interceptions, including three by Sergio Gilliam. Antonio Clay had six tackles, including two sacks, while Jermaine Martin added two sacks and six total tackles. Defensive end Brandon Cannon had just three tackles, but all were behind the line of scrimmage, including two sacks.

It should be pointed out that Clemson quarterbacks could not be tackled. Defensive players merely had to touch the quarterback to record a sack or end the play.

Tyler Grisham was one of the stars on offense for the victorious White team as the rising sophomore from Alabama had 9-106 yards receiving. Fullback Alex Pearson caught the only touchdown pass for the victorious White team on a nine-yard reception from Cullen Harper in the fourth period. Paul Macko was the top ball carrier in the game with 12-66 and a rushing touchdown.

Harper quarterbacked the White team to the win by hitting 15-25 passes for 156 yards and a touchdown.

The most exciting play of the day was turned in by the Orange team. Quarterback Tribble Reese found Rendick Taylor on a short bubble screen. The rising sophomore then turned on the speed and out-rated the White defense for a 97-yard scoring pass. Taylor ended the day with 4-174 receiving on Saturday. It was the most receiving yards in a Clemson Spring game in history, breaking the record of 150 receiving yards by Jack Anderson in 1970.

“Rendick has been playing that way since he came to Clemson, he has just been limited by injury,” said Bowden. “He has played multiple positions since he came here and has played well. His performance today did not surprise me.

Clemson starting quarterback Will Proctor struggled on Saturday, as he hit just 4-9 passes for 73 yards and he threw three interceptions. One was a 35-yard return for a touchdown by Gaddis. Last year, in a more traditional scrimmage format, Proctor threw for a Clemson Spring Game record 275 yards passing. Reese completed 3-10 passes for 113 yards.

The White team took a 10- 0 lead in the second quarter after a Mark Buchholz 33-yard field goal and the Gaddis interception return. Demerick Chancellor then scored on a one-yard run just 11 seconds before halftime for the Orange team to make the count 10-7 at intermission. Taylor’s big play from Reese brought the Orange team into the lead at the 4:45 mark of the third period. It was a lead that the Orange team held until the final four minutes of the game.

Harper took the White team on a 43-yard drive in eight plays that culminated in a nine-yard scoring pass to Pearson with just 3:24 remaining. Macko then scored on a 12-yard run with just 22 seconds left to account for the 24-14 final score.

“The defense was much improved over last Saturday,” said Bowden. “That happens during the spring. They were motivated by what happened last Saturday when the offense dominated. They have pride and wanted to make amends for that performance. It was good to see that they wanted to have the upper hand today.

“Sergio Gilliam stood out in the secondary with three interceptions. He has been battling for a starting position at cornerback all spring.”