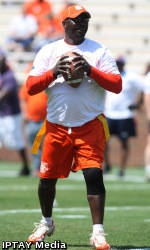 CLEMSON, SC – Homer Jordan showed he still has some life in his arm, and Airese Currie showed moves that would make you think he could still play in the NFL in the White team’s 50-38 victory in the fifth Annual Clemson Sons Bowl Flag Football Game at Memorial Stadium on Saturday. The four quarter contest played with a running clock was played in brilliant sunshine as a preliminary to the Orange & White game.

Jordan completed 24-39 passes for 410 yards and six touchdowns in leading his team to the victory. Currie had 10 catches for 213 yards and four touchdowns. He had two touchdown receptions in each half and also had a two-point conversion reception, giving him 26 points in the game.

Former NFL player Wardell Rouse added 75 receiving yards in three catches, including a 22-yard touchdown pass in the last quarter that put the game out of reach. All of his catches came in the second half.

Michael Allen might have been the top all-around player in the game as he had two interceptions, one that he returned 40 yards for a score, and also had a touchdown reception on offense.

The Orange team was led by Patrick Sapp who completed 28-39 passes for 545 yards and six touchdowns. However, he did have two interceptions, both by Allen. The Orange team outgained the White team, 605 yards to 467. Sapp had all 605 yards of total offense for the Orange team, but it was not enough.

Former walk-on kicker Fletcher Anderson was the top receiver for the Orange team with five catches for 150 yards and two scores. He had TD scores of one and 42 yards and also had a 55-yard reception to set up another. Will Merritt had five catches for 106 yards, including three catches in which he executed a lateral on the play, either to help his team gain more yards, or because he just couldn’t run any further.

Mike Webber, who played for the Tigers from 1971-74, had two touchdown receptions, including the final score of the game when he made a diving catch in the endzone on a 32-yard reception from Sapp. Domarco Fox and Joe Don Reames also had touchdown receptions for C.J. Spiller’s team.

Nick Eason was the coach of the winning White team, his first coaching victory in the Sons Bowl.

The game was closer than the score indicated as both teams scored six offensive touchdowns. The difference was Allen’s pick six and the extra point efficiency of the White team. Eason’s team made 4-7 two-point conversions, while Spiller’s team made just one of six.