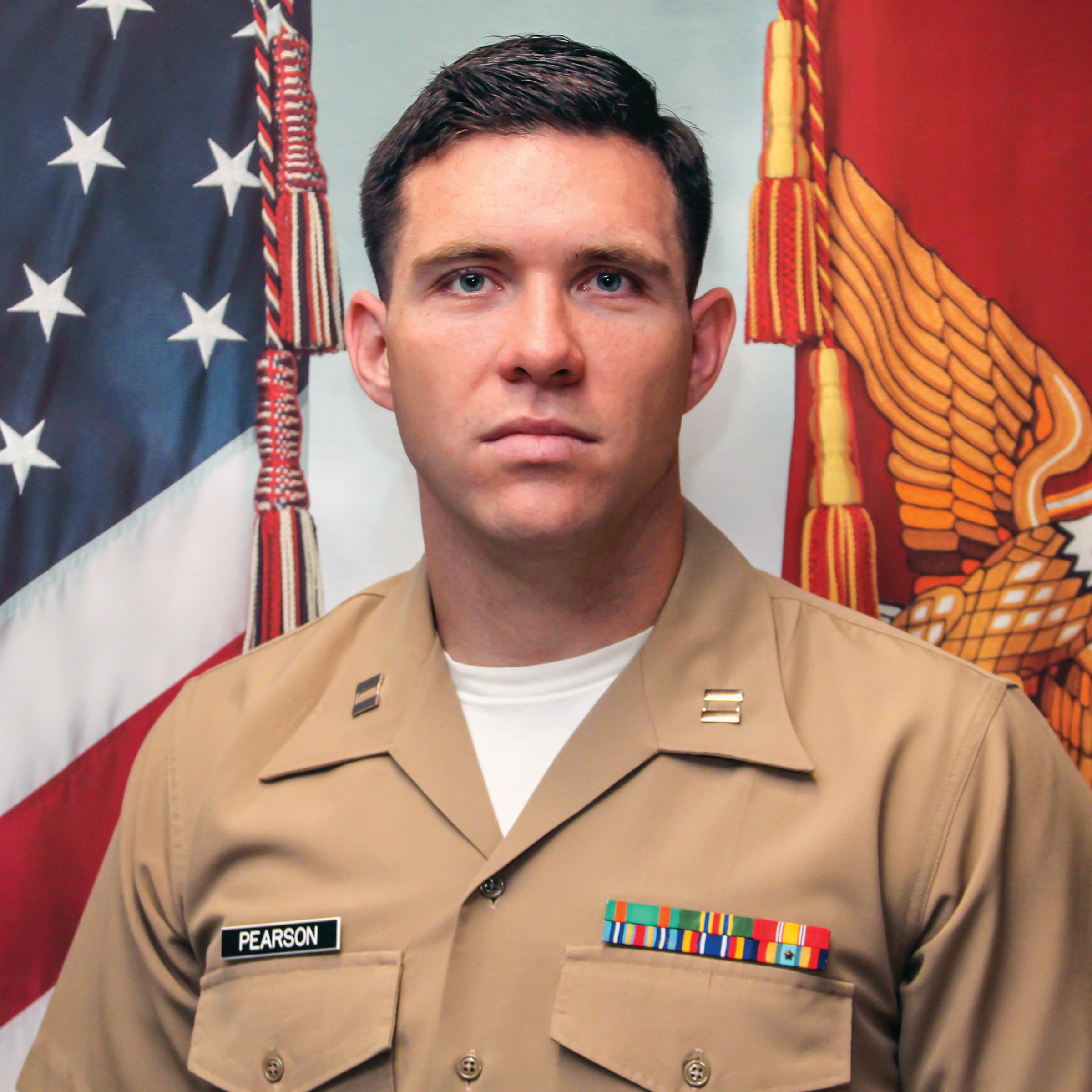 Where Are They Now? – Capt Alex Pearson

Alex Pearson lettered two seasons (2006,07) for the Tigers after working his way up the depth chart his first three years on campus. The native of Greenville, S.C. and graduate of Greenville High School had been recruited to Clemson as a linebacker, redshirted his freshman season in 2004 and then did not appear in a game as a reserve fullback in 2005.

“It was a great experience,” said the Marine Captain on his initial recruitment to Clemson. “I grew up a Clemson fan. Both my parents went to Clemson. My mom is from Clemson. When they offered me a scholarship, it was probably the greatest opportunity in my life at that time. Getting there and getting adjusted as a freshman was a difficult experience, but also one that was very exciting.”

Pearson saw success as the first-team fullback in 2006, making holes and lanes for playmakers James Davis and C.J. Spiller, as they rushed for a combined 2,125 yards. Clemson led the ACC in rushing thanks in large part to Pearson’s blocking. While he did his fair share of grunt work, Pearson also found football glory, and more excitement it would seem, catching a two-yard touchdown pass against Louisiana Tech and a four-yard score against Temple.

However, he has found even more rewarding experiences since his time on the gridiron. Upon graduating, the 6’0”, 245-pound bruiser went to Marine Corps Officer Candidate School (OCS) in October 2008. He was stationed at Camp Pendleton as an infantry officer and did two deployments with them. Currently, he is stationed in Columbia, S.C. as the Executive Officer of the Marine Corps Recruiting Station Columbia.

“I’m second-in-command of the recruitment station,” he said. “We cover South Carolina, Southwestern North Carolina – Charlotte, Monroe, Gastonia and the Asheville area – and Augusta, Ga. I’m responsible for all the programs we run in the 350 high schools we are responsible for.

“It’s recruiting. We’re responsible for all enlisted and officer recruiting for our 42,000 square-mile area.

“One of the programs I run is called the Naval ROTC Scholarship Program. It’s a scholarship for high school seniors and college freshmen, and it gives them $180,000 towards any school that has a Naval ROTC program. When they graduate OCS, they become Marine Officers.”

Recruiting is something Pearson is obviously familiar with through his high school-turned-college football days, but his own enlisting wasn’t even on his own radar originally.

“Honestly, I wasn’t predisposed to the Marine Corps or the military,” said Pearson. “I think I decided, maybe halfway through my senior season, that I wanted to serve my country.

“But I didn’t know which service. I knew I wanted to serve as an infantry officer, on the ground, fighting. I linked up with Col. Sandy Edge. He’s an advisor with the College of Business & Behavioral Sciences, but he also has some strong ties to the football program. He’s also a retired Air Force Colonel. He introduced me to the Officer Selection Officer who works out of Charlotte, and it turned out that the Marine Corps was the right fit.”

He recognizes that the school that meant so much to him for so long has a rich history that means a lot to so many.

“Clemson has one of the stronger military traditions in the country, especially with major Division I schools,” stated Pearson. “Since I’ve been in the Marines, I try to go back for the Military Appreciation Day games if I can, as long as I wasn’t deployed. I would come back for games, and the appreciative aspect of it has been phenomenal.

“Nothing could have better prepared me to become a Marine Officer than Clemson football. The mental and physical toughness I learned during mat drills and summer workouts from Strength Coaches Joey Batson and Larry Greenlee allowed me to excel during high stress and high intensity situations at OCS and the Infantry Officer Course.

“The leadership principles and lessons I learned from coaches such as Dabo Swinney, Burton Burns and David Blackwell on a daily basis throughout each season helped me as a Rifle Platoon Commander and Company Executive Officer. I apply many of the lessons I learned as a football player on a daily basis as a Marine. Essentially, Clemson football set the foundation for me to become a successful Marine Officer.”

At this point, Pearson is comfortable doing what he felt a strong urge to do just a few years ago, but he does point out that his plan is to transition out of active duty next summer and transfer into the reserves. He stated that he would like to move back to the Greenville area in order to pursue an MBA, using the GI Bill. After that, his plan is to, “see where it all goes.”

Pearson never stopped making an impression after his days as a college football player ended. And to this day, it is easy to see that he is still leading the way for others behind him.