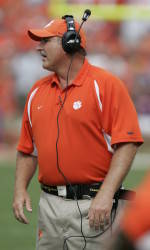 Clemson, SC- Ron West announced today that he will remain on the Clemson football staff. On Wednesday evening, West Virginia Head Coach Rich Rodriquez announced that he had hired West as his assistant head coach and offensive line coach. On Thursday, West informed Rodriquez that he had decided to remain at Clemson.

“I did in fact accept the position with West Virginia on Wednesday. It is an outstanding program under Rich Rodriquez’s leadership. I have known Rich for a long time and worked with him at Tulane and Clemson.

“But, Clemson is outstanding program as well. I think we are very close to reaching the next level and, as a Clemson graduate, I want to be a part of it when it happens. It came down to a decision by my family unit, and I feel a big part of the Clemson University family. This is home.”

West contacted Clemson Head Coach Tommy Bowden on Thursday afternoon and asked if he could return and Bowden said yes.

“We welcome Ron back, he has had a significant, positive impact on our program.”