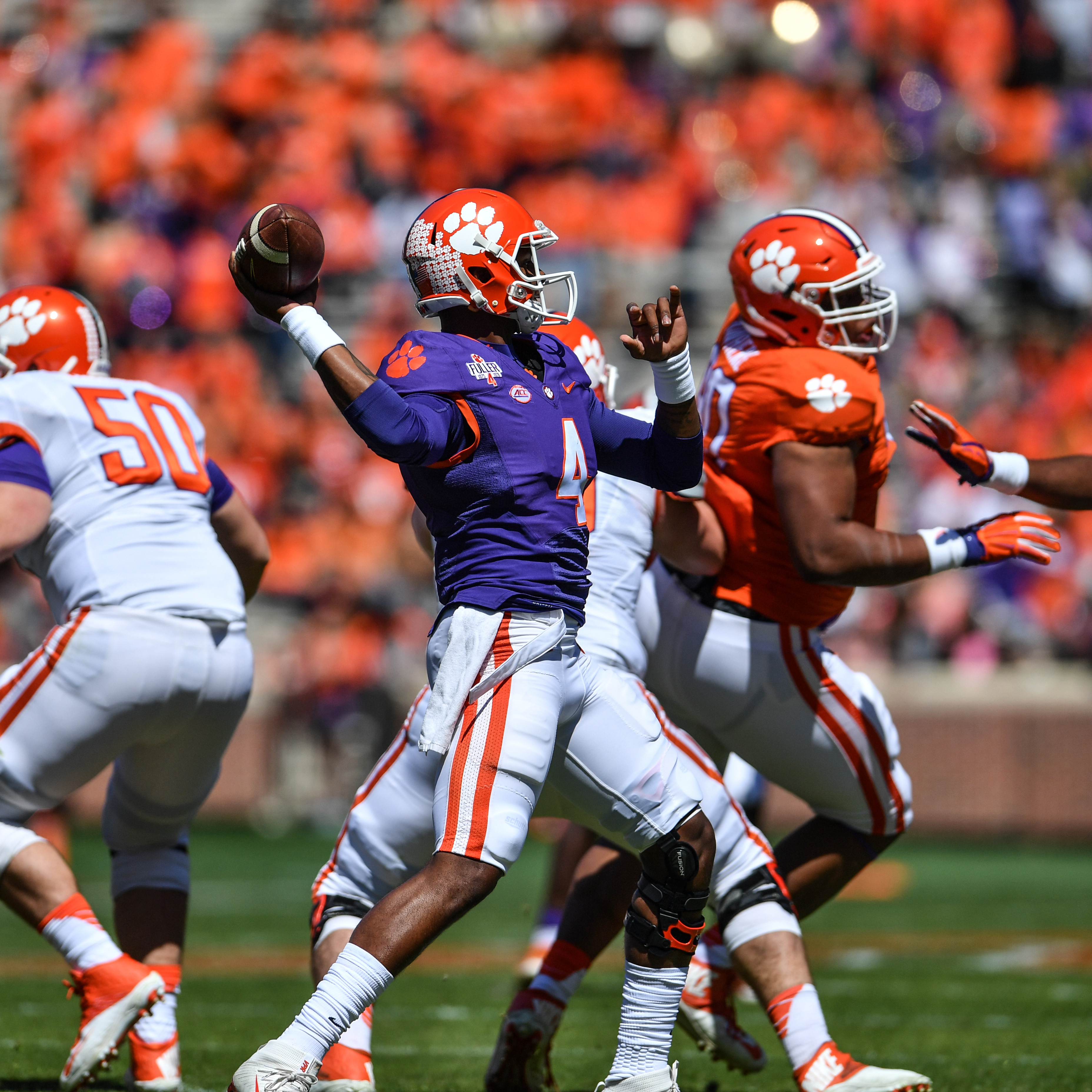 Clemson,S.C.—Deshaun Watson played just four possessions, but threw two touchdown passes to lead the Orange Team to a 17-9 victory in Clemson’s annual Spring Football Game at Memorial Stadium.  A record crowd of 50,500 fans turned out on the perfect 58-degree day for football.

It was Clemson’s first public appearance in Memorial Stadium since Dabo Swinney’s Tigers finished the 2015 season with a 14-1 record and No. 2 ranking in the final polls.  It established a school record for wins in a season and was the second highest finish in the nation polls in school history.

“The first thing I want to do is thank our fans,” said Swinney.  “To have 50,000 fans today, that was awesome.  It creates a game day environment for our team, and is especially important for our young guys.  It shows them what it is like.  You just can’t simulate that atmosphere in practice.”

Watson, who finished third in the Heisman Trophy voting last year when he became the first quarterback in FBS history to throw for over 4,000 yards and rush for over 1,000, played two possessions for each team, then joined Swinney on the field watching the remainder of the game.

Swinney and his coaching staff divided his squad evenly for the game.  Only Watson played for both teams.

Watson took the Orange team on a 65-yard drive on the first possession of the game.   He completed a 47-yard pass to Hunter Renfrow over the middle on the second play.  He then completed a 10-yarder to Renfrow and a four-yarder for the score to the Clemson sophomore, who had two touchdown receptions against Alabama in the National Championship game.

After the White team scored on a field goal by Adam Spence, Watson threw a 61-yard touchdown pass to sophomore receiver Ray Ray McCloud, giving the Orange team at 14-3 lead.

“Deshaun got better this spring,” continued Swinney. “He has gotten stronger physically, he looks great.  You can’t set the bar high enough in any area for this guy.”

Watson played one more possession for the White team, then was done for the day.  Playing for both teams he combined to complete 7-11 passes for 141 yards and two scores, a passing efficiency rating of 226.

“Overall it was an excellent spring,” said Swinney.  “We got a lot accomplished.  Today, I thought the backs ran well and the receivers made some plays.    We have a competition for the backup quarterback and I think all those guys did some good things today.  We take some things away from Kelly Bryant by playing with a quick whistle during the spring.  But we know he has the ability to create.  Nick Schuessler just keeps showing up.  I thought he had a good day and Tucker Israel made some plays out there.

“There was a strong wind today and I could see the guys during warmups concerned about it, but I told them the guys (golfers at Masters) at Augusta have to go figure it out today.”

Adam Choice was the top rusher in the game with 17 attempts for 88 yards for the Orange team.  The red-shirt sophomore sat out last season recovering from a torn ACL that he had suffered at Boston College in 2014.  Wayne Gallman, who set the Clemson single season rushing record last year with 1,527 yards, added 8-58 on the ground.  C.J. Fuller led the White team with 16 rushes for 58 yards.

Renfrow led the Orange team in terms of receptions with 5-85, while McCloud finished with a game high 98 receiving yards on three catches.  Trevion Thompson led the White squad with six catches for 87 yards.  Artavis Scott added 5-52.

The game had some strong performances defensively as only 26 points were scored, including just three in the second half when many of the starters on both sides rested.  Freshman Tre Lamar was the top tackler in the game with 10 stops for the White Team.    J.D. Davis and Kendall Joseph had seven stops to lead the Orange Team. There were only two turnovers in the contest, interceptions by White team defensive backs Marcus Edmond and Ryan Carter.

“I like the chemistry of this team.  I told the team that after the game.  They have been on the same page since day one in a way that has been unique.  I think the pain of getting so close last year has been a positive in preparing for this year.”