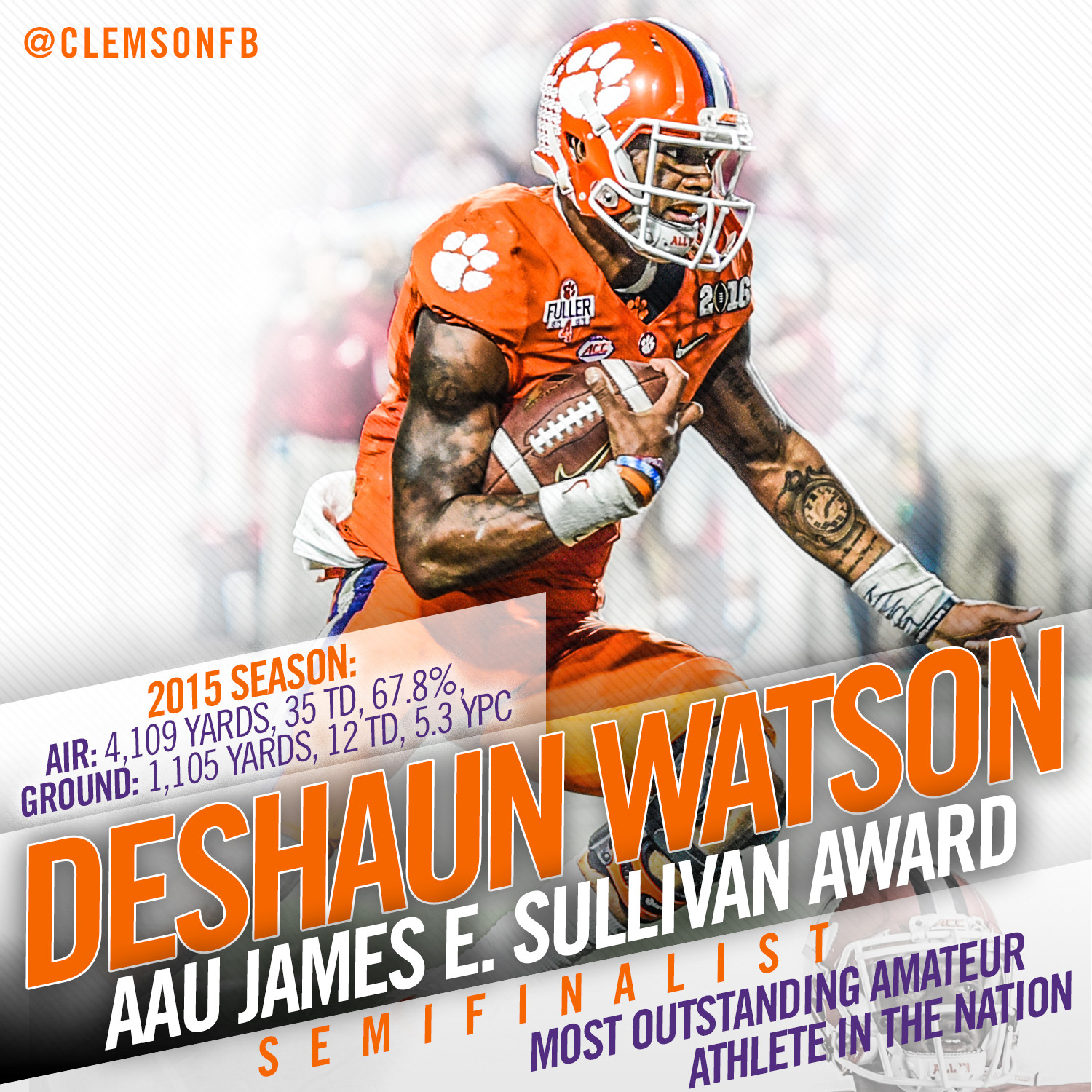 In 2015, Watson led the Clemson Tigers to an undefeated 12-0 regular season record and a No. 1 ranking in the polls heading into the College Football Playoff. Clemson finished with a 14-1 record and the 14 wins set a school record.

For his accomplishments during the season, Watson was selected as a finalist for the Heisman Trophy, marking the first time a Clemson player has been invited to attend the presentation. Watson earned the Davey O’Brien Award, which is awarded annually to the best college quarterback, and named the 2015 ACC Player of the Year. He also won the Manning Award as the nation’s top quarterback.

Watson earned the ACC Championship Game MVP, accumulating more than 400 total yards and five touchdowns in a 45-37 win over No. 10 North Carolina, and eventually set the national championship game record with 478 total yards of offensive in a 45-40 loss to Alabama,  the nation’s best defense.

Watson threw for more than 4,000 yards in the air and rushed for another 1,000 yards on the ground as a true sophomore in the 2015 season. He is the first, and currently the only, player ever to accomplish this feat in the history of college football.

“The AAU James E. Sullivan Award is a one-of-a-kind honor for all of our semi-finalists,” said Melissa Willis, AAU Sullivan Award National Chair. “It is remarkably unique in that it allows us the opportunity to recognize the most elite amateur athletes across every sport imaginable.”

The AAU Sullivan Award has been presented annually since 1930 to the most outstanding amateur athlete in the United States. Representatives from the AAU created the Sullivan Award with the intent to recognize amateur contributions and achievements from non-professional athletes across the country.

“We are truly excited about this year’s class of semi-finalists for the AAU James E. Sullivan Award,” said Dr. Roger Goudy, President/CEO of the AAU. “Each one of them embodies everything this award aims to celebrate – athletic achievement, leadership, citizenship, character and sportsmanship – both on and off the field.”

Voting is open to the public at www.aausullivan.org. Semi-finalist voting opens today and will close on March 14. Finalists for the 86th AAU Sullivan Award will be named on March 17.  The winner will be announced in New York on April 10.

The Amateur Athletic Union (AAU) is one of the largest- non-profit volunteer sports organizations in the country. As a multi-sport organization, the AAU is dedicated exclusively to the promotion and development of amateur sports programs. Founded in 1888 to establish standards and uniformity in sports, the AAU philosophy of “Sports For All, Forever” is now shared by nearly 700,000 members and 150,000 volunteers across 35 sports programs and 55 U.S. districts. For more information, visit www.aausports.org.