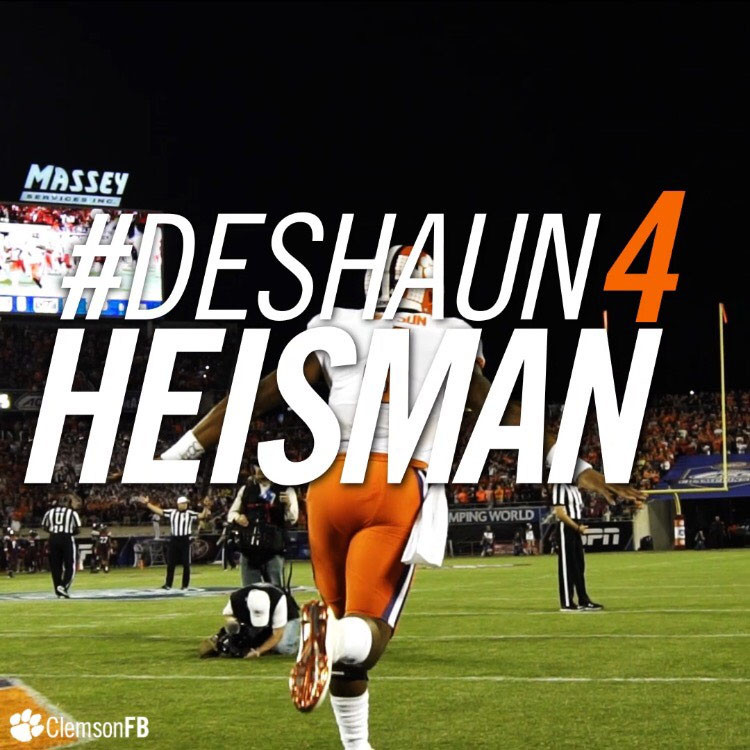 Clemson, S.C.—Clemson quarterback Deshaun Watson has been named a finalist for the Heisman Trophy for the second consecutive year.  He is the first player from any school named a Heisman finalist in consecutive years since Johnny Manziel of Texas A&M in 2012 and 2013.  Watson is the first ACC player to be a two-time Heisman Finalist as well.

Watson is joined on the list of Heisman finalists by Lamar Jackson of Louisville, Jabrill Peppers of Michigan, Baker Mayfield and Dede Westbrook of Oklahoma.

“This is a great honor for Deshaun and our program,” said Head Coach Dabo Swinney.  “You just don’t have a lot of two-time Heisman Finalists over the history of your program.  He is our first, and he’s very deserving. I’ve said it before; I believe he is the best player in the nation and has been a great representative of our University. College football is better over the last three years because of Deshaun Watson.”

The native of Gainesville, Georgia who is a junior in eligibility, but will receive his undergraduate degree on December 15, led Clemson to the ACC Championship last Saturday in a 42-35 victory over Virginia Tech. It was the second consecutive year Clemson has won the ACC title, the first time the program has done that in 28 years. Watson is the first Clemson quarterback to lead the Tigers to back-to-back conference crowns since Rodney Williams led Clemson to three straight from 1986-88.

Watson was 23-34 for 288 yards and three touchdowns passing and added a team best 85 yards rushing on 17 carries and scored twice against Virginia Tech. He was named the Most Valuable Player of the ACC Championship game for the second consecutive year.

For the season, Watson has completed 329 of 487 passes for 3914 yards and 37 touchdowns. He ranks fourth in the nation in completions, fifth in touchdown passes, eighth in completion percentage and eighth in total offense. His 37 touchdown passes are a Clemson season record and second in ACC history behind the 40 Jameis Winston had when he won the Heisman in 2013. Watson has added 526 yards rushing, giving him 4440 yards of total offense.

Watson has finished strong, connecting on 138 of 186 passes for 1586 yards and 15 touchdowns over the last five games. That is a 74 percent completion percentage. He has had 20 touchdowns rushing and passing over the five games, including 11 in the last two games, and averaged 356.8 total offense yards per game for the last five contests.

Earlier Monday, Watson was announced as the winner of the 2016 Chic Harley Award by the Touchdown Club of Columbus, Ohio.  The award has been presented each year since 1955 to the National Player of the Year through the conference championship weekend.

Watson won the Archie Griffin Award last year from the same organization.  It is presented to the top college player through the bowl season.  Watson will receive the award at the Touchdown Club of Columbus Awards banquet on Feb. 4, 2017.