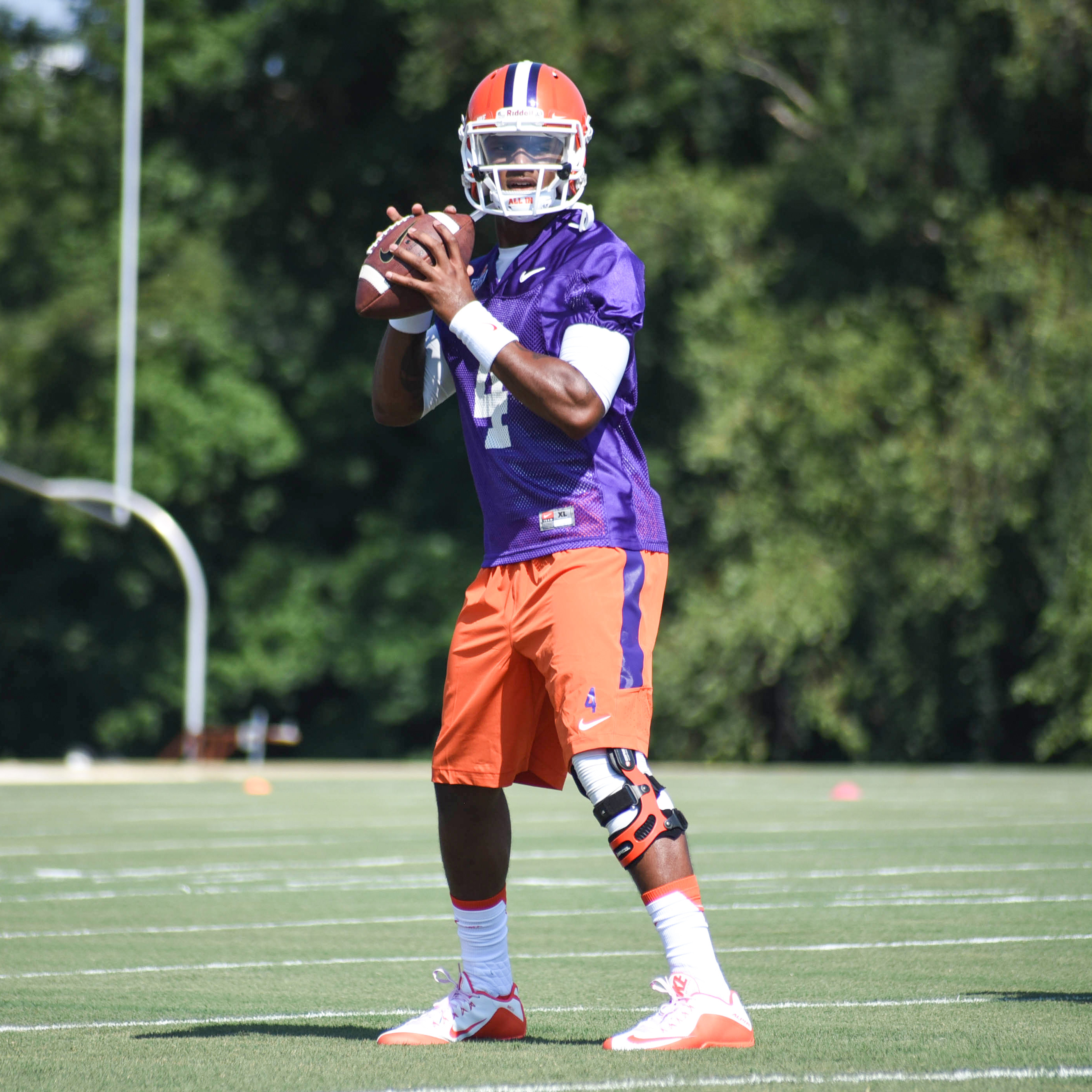 CLEMSON, S.C. — Quarterback Deshaun Watson was back on the practice fields in full go mode for the first time since November 29, and the reviews from Coach Dabo Swinney and Watson himself were good.

Playing with a torn ACL, Watson led Clemson to a victory over South Carolina in the regular season finale last year. He had surgery shortly thereafter and has been in rehabilitation mode ever since. He joined the team for workouts in late June, but Tuesday’s first practice of the season was his first full scale workout since the South Carolina game.

“He was outstanding,” said Swinney with a smile after practice. “He looked like he had just played a game last week. Deshaun has a great work ethic and put in a lot of time over the spring and summer. He is one of the most disciplined and prepared players I have seen, and it was great to have him back at practice today.”

Watson played 330 of Clemson’s 990 offensive snaps last year and led Clemson to four wins in five starts. He completed 68 percent of his passes with 14 touchdowns and just two interceptions. His 188.6 passing efficiency rating was best in the nation among quarterbacks with at least 125 passes.   He was voted the preseason Player of the Year by the media attending the ACC Football Kickoff at Pinehurst last month.

“It felt great to get back out here,” said Watson, who will wear a brace on the knee throughout the season. “I have been working hard the entire off season. It was a day I have been looking forward to.”

While Watson was back in strong form, the Tigers did lose a quarterback early in the first practice.  Freshman Tucker Israel of Orlando, Fla., suffered a broken foot during a drill and should be out a number of weeks. “He broke the fifth metatarsal bone in a foot early in the practice,” said Swinney.  “He will be out at least four weeks. It is the same injury Garry Peters had last year when he was out a month during the 2013 season. “

Israel enrolled at Clemson in January and threw for 110 yards in the spring game. An honorable mention Parade All-American, Israel broke Tim Tebow’s state record for career touchdown passes with 162 and passed for over 15,000 yards.

Despite that injury, Swinney was happy with his team’s first practice. “It was a good first day. It was a day of  learning good practice habits. There was good energy throughout and that was great to see.  I liked the tempo. Tomorrow and the next few days will be about installation and continuing to focus on fundamentals.

Clemson continues practice this week through Saturday before taking a day off on Sunday.