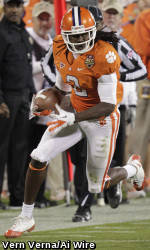 CLEMSON, SC – Clemson wide receiver Banks McFadden Award on offense by the Greenville Touchdown Club. The honor was presented Monday at the club’s annual year ending banquet. The award is named after former Clemson All-American of the 1930s, Banks McFadden.

Watkins broke ACC freshman records for receptions (77), reception yards (1153) and touchdown receptions (11) in helping Clemson to its first ACC Championship in 20 years. Those totals are also the best in the nation among freshmen this season. His reception yardage total is the best in Clemson history regardless of class. Watkins had three games with at least 150 receiving yards, already a Clemson career record for 150-yard receiving games.

Watkins was honored by the Atlantic Coast Conference seven times this year, four as ACC Rookie of the Week and three times as ACC Receiver of the Week.