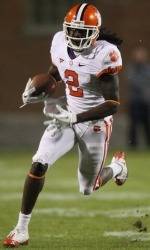 Watkins had 345 all-purpose yards in Clemson’s 56-45 victory over Maryland in College Park, a victory that gave the Tigers a 7-0 record overall, 4-0 in the ACC. Watkins had eight receptions for 105 yards and two touchdowns, a 33-yard rush and five kickoff returns for 207 yards, including an 89-yard return for a touchdown.