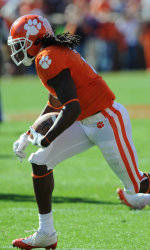 Watkins Named Semifinalist for Walter Camp Player of the Year

CLEMSON, SC – Clemson freshman Sammy Watkins has been named one of 15 national semifinalists for the Walter Camp Player of the Year Award. Watkins is the only freshman and one of just two receivers on the list.

A list of five finalists will be announced on Wednesday, November 30. The 2011 Walter Camp Player of the Year recipient, who is voted on by the Football Bowl Subdivision head coaches and sports information directors, will be presented live on Thursday, December 8 during the 6 p.m. edition of ESPN Sports Center. The winner will receive his trophy at the Foundation’s annual national awards banquet on Saturday, January 14, 2012 at the Yale University Commons in New Haven.

Watkins has had a record setting season just 10 games into his Clemson career. He has 68 receptions for 1034 yards and 10 touchdowns. He has established ACC freshman records in all three areas. He also leads all freshmen nationally in those three areas.

The native of Fort Myers, FL is also fourth in the nation in all-purpose running yards per game with a 187 yard average. Watkins has been named ACC Rookie of the Week four times and the Receiver of the Week three times this year. He has three games of at least 150 receiving yards this year, already a Clemson career record.