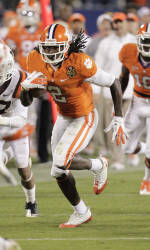 Watkins Named National Freshman of the Year by Rivals.com

Watkins, who was named the ACC Freshman of the Year by the Atlantic Coast Conference Sports Media, has 77 receptions for 1153 yards and 11 touchdowns this year. He ranks fourth in the nation in all-purpose yardage with 173 yards per game, and his 2077 total all-purpose yards rank second best in Clemson history behind C.J. Spiller’s 2680 in 2009.

Watkins leads all freshman receivers in receptions, yards and touchdowns this year and also set ACC freshman records in all three areas. His 1153 receiving yards are a Clemson record regardless of class. He has three games of at least 150 receiving yards, already a Clemson career record.

Branch leads the ACC in sacks with 10.5 and is third in tackles for loss with 16. His 78 tackles rank second on the team overall, but he leads the team in first hits with 59.