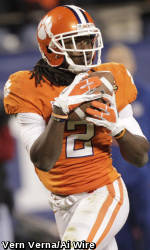 CLEMSON, SC – Clemson wide receiver Sammy Watkins has been named a first-team Freshman All-American by CBSSports.com. Watkins is one of five ACC players on the team.

Watkins broke ACC freshman records for receptions (77), reception yards (1153) and touchdown receptions (11) in helping Clemson to its first ACC Championship in 20 years. Those totals are also the best in the nation among freshmen this season. His reception yardage total is the best in Clemson history regardless of class. Watkins had three games with at least 150 receiving yards, already a Clemson career record for 150-yard receiving games.

Watkins was honored by the Atlantic Coast Conference seven times this year, four as ACC Rookie of the Week and three times as ACC Receiver of the Week.

In addition to Watkins, other ACC players on the Freshman All-America team were Giovani Bernard, running back from North Carolina, Timmy Jernigan, defensive lineman of Florida State, Denzel Perryman, linebacker from Miami (FL) and Merrill Noel, defensive back from Wake Forest.