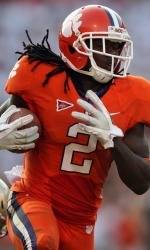 CLEMSON, SC – Clemson wide receiver Sammy Watkins and offensive coordinator Chad Morris have been honored by Rivals.com as National freshman and offensive coordinators of the week, respectively, by Rivals.com. Clemson quarterback Tajh Boyd has been honored as the ACC Player of the Week. It is the second consecutive week Watkins has been named the national Freshman of the Week and the second straight week Boyd has been named the overall ACC Player of the Week.

Morris coached Clemson to 35 points and 443 yards against the nation’s fifth-ranked defense in Florida State. The Seminoles came into the game allowing just 195 yards per game. The Tigers converted 9-17 on third down as well and scored five touchdowns. He has the Tigers ranked 13th in the nation in total offense, 16th in passing and 23rd in scoring.

Boyd completed 22 of 35 passes for 344 yards and three scores in the win over Florida State. He threw for three scores and ran for one as he led the Tigers to at least 35 points for the fourth straight game. Boyd is now 12th in the nation in passing efficiency and 10th in total offense.