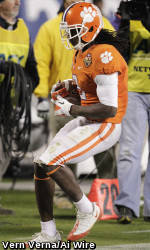 This is the first time Clemson has had three players chosen first, second or third team by AP since 1991 when Jeb Flesch was a first -team choice at offensive guard, Rob Bodine was a second-team selection at middle guard and Ed McDaniel was a third team selection at linebacker.

This is the third straight year Clemson has had a first-team AP All-American, the first three-year stretch in school history.

Watkins, who was also named the National Freshman of the Year by Sporting News on Wednesday, had 77 receptions for 1153 yards and 11 touchdowns this year. He led all freshmen nationally in those categories. He ranked fourth in the nation in all-purpose running yards per game with 2077, second in Clemson history behind C.J. Spiller’s 2680 yards in 2009. Spiller was named first-team AP All-American as the all-purpose player that year.

Allen has 48 receptions for 577 yards and eight scores this year, Clemson records for receptions, yards and touchdown catches by a Clemson tight end for a season. He won the John Mackey Award as the nation’s top tight end this year.

Branch led the ACC in sacks with year with 10.5 and has 16 tackles for loss. He has 78 tackles to rank second on the team and is trying to become the first defensive lineman to lead Clemson in tackles since William Perry in 1984.