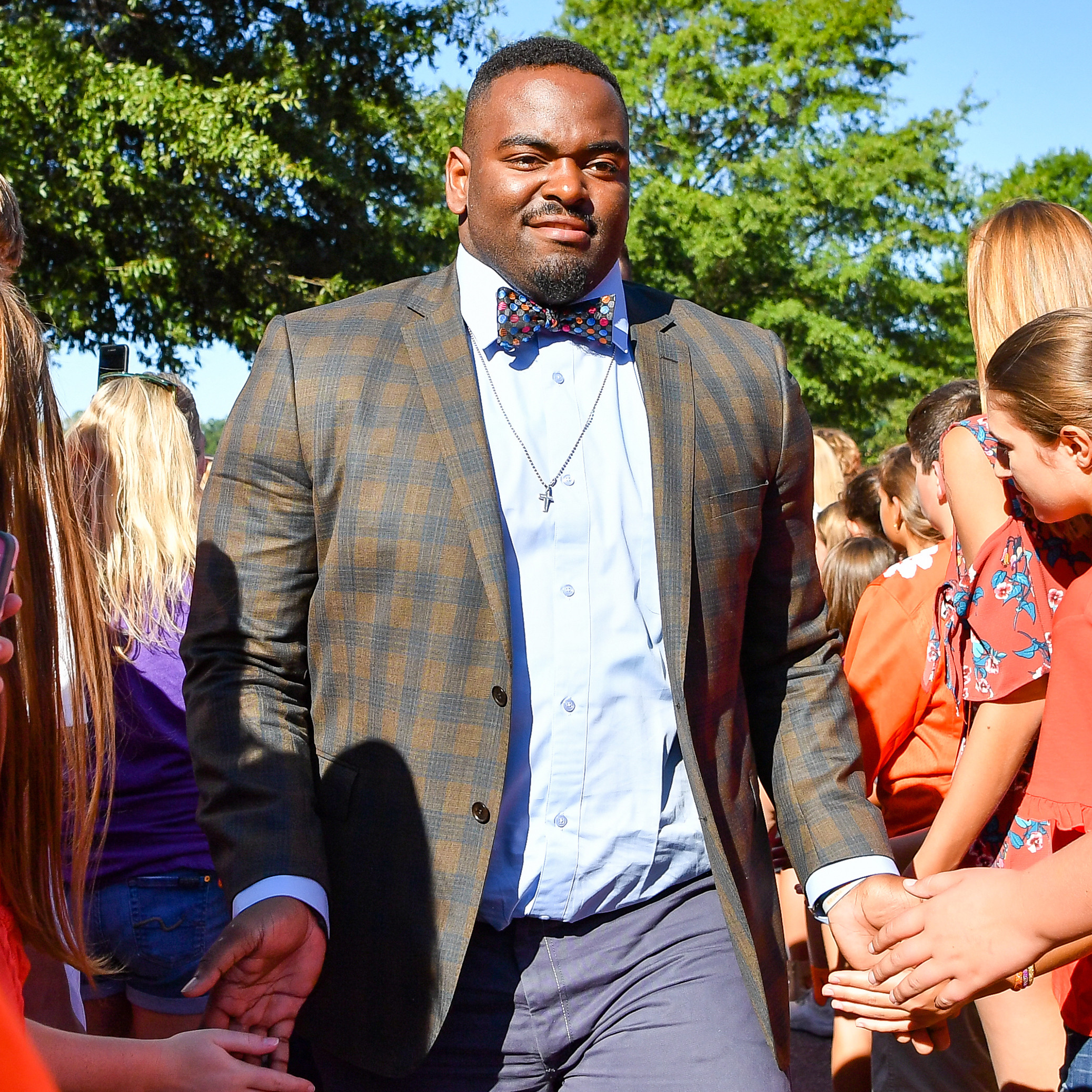 A proud and devoted member of the Tiger family, graduate offensive guard Tyrone Crowder has embraced his newfound role as the heart and soul of the Clemson offensive line this season with flying colors, giving his all for the teammates whom he considers brothers.

The lone senior in the regular starting rotation along the offensive front for the Tigers, Crowder is coming off a solid 2016 campaign that saw him start all 15 games, play 859 snaps, and collect 25 knockdowns for an offense that gained 7,552 yards, second most in school history.

However, Crowder is aiming to accomplish much more this fall, as stats are not his concern. Instead, carrying forth with the tradition of unwavering leadership expected of Clemson’s veterans is his ultimate aspiration this season.

“I’ve been trying to step into a new role of being that vocal guy who can lift up the team and boost morale when things aren’t going as planned.”

Clemson has had that person on the offensive line each of the last two years in Eric Mac Lain (2015) and Jay Guillermo (2016).

With Clemson roots that run deep, Crowder spent a portion of his high school career at nearby Greer High School prior to transferring to Richmond Senior High School in Rockingham, N.C. Thereafter, Crowder, who was inspired by his cousin and former Clemson All-ACC linebacker, Stephone Anthony (now with the New Orleans Saints), opted to suit up for the Tigers, a decision that paid dividends for both parties.

For Crowder, his success is not entirely an individual triumph. It is also a reflection of the ever-reliable band of brothers that surround him on the front lines.

“We are very dependable,” remarked Crowder when speaking about the offensive line. “We have guys constantly rotating in and out, but I know that I don’t have to worry about the guys beside me making mistakes, because they’re always going to bring their ‘A’ game.”

Part of an offensive line that allowed just 39 sacks the past two seasons while aiding in the Tigers amassing nearly 6,000 rushing yards, Crowder is like many of Clemson’s current offensive linemen in that he can play at most positions along the line.

Versatile and gifted at pass blocking, Crowder has quietly solidified himself as one of Clemson’s most efficient performers, making the most of the supportive and nurturing environment presented to him by way of the camaraderie he shares with his fellow blockers.

“We’re really tight-knit,” stated Crowder about the close friends that make up Clemson’s offensive front. “We do everything together. We’re brothers.”

At 6’2” and 340 pounds, Crowder, who is agile and strong, has all of the physical attributes needed to be a success at the professional level. But what has him primed for long-term success, above all else, is his steadfast dedication to being the best he can possibly be, no matter the circumstances.

Sharing a close bond with offensive line coach Robbie Caldwell, Crowder has used his tutelage, as well as the tutelage of head coach Dabo Swinney and the entire coaching staff, to learn and grow to become one of the most valued members of the offense.

“He’s been a great leader and mentor,” said Crowder when speaking on the impact that Caldwell has had on him. “He is always there to offer support when things get tough. I can always depend on him.”

Despite having a calm, mild-mannered personality, Crowder has quickly developed into an impassioned leader up front for the Tigers in recent months. While his predecessors in that leadership position, such as Guillermo, typically approached their leadership roles in a much more demonstrative way, Crowder has earned the respect of his peers simply by walking the walk and allowing his play to do all of his talking.

“We took Tyrone to the ACC media day in Charlotte in July,” said Swinney. “We took him out of his comfort zone a bit, because he had not done a lot of interviews. But like he does in everything else, he responded and did a great job representing our program. It was a good day for him, because it told him that he is one of the leaders of this team.”

Motivated to hold himself to the highest of standards, Crowder has an added inspiration from his personal life that fuels him day in and day out as he puts in the work required to reach his maximum potential.

His younger brother, Tyrell, has lived a much different life than his older brother, as the 15-year-old has never been able to play contact sports due to a neurological health issue that he has dealt with his entire life. Therefore, Tyrell has lived vicariously through Tyrone, all the while motivating the big brother who aspires to make his little brother proud at every turn.

“When I play, I always give it my all because I know that he’s watching, and I want to make him proud,” said Tyrone when discussing Tyrell.

Needless to say, Crowder has certainly done Tyrell, among many others, proud throughout his Clemson career. A former high school All-American, Crowder has lived up to the billing and then some as a member of Clemson’s vaunted offensive line.

Contrasting with his congenial disposition off the field, Crowder has established a reputation for himself as a relentless protector of the quarterback on the gridiron. But to Crowder, he is merely doing what is expected of him and fulfilling the expectations that have come with the opportunities he has been granted.

A class act and humble servant of the game, Crowder is the living embodiment of all that a football player should stand for. In his eyes, nothing is more important than family, and the Clemson Tigers, his extended family, have certainly benefited from his brotherly devotion to their cause.

Crowder, the gentle giant with a heart of gold, has indeed led the way up front for the Tigers for nearly three seasons, refusing to slow down and refusing to stray from his course, all the while walking the good walk each and every step of the way.