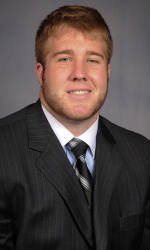 CLEMSON, SC – Clemson starting right tackle Landon Walker had minor arthroscopic knee surgery on Thursday. The surgery was not the result of any specific recent injury. He is expected to be ready for the first day of practice on August 5.

Walker is Clemson’s most experienced offensive lineman and is a veteran of 39 games, including 35 starts. He has played 2,098 plays in his career dating to the 2008 season. Last year he started all 13 games and played 805 snaps. He had at least one knockdown block in every game. He played in all 14 games and started 12 on Clemson’s Atlantic Division Championship team of 2009.

Walker was to be one of Clemson’s players at the ACC Football Kickoff this weekend at Pinehurst, NC, but he will not attend due to his recovery from the surgery. Clemson starting center Dalton Freeman, who has been named as preseason candidate for the Outland Trophy, the Lombardi Award and the Rimington Award, will replace Walker as Clemson’s representative on offense.