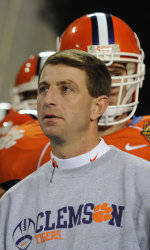 CLEMSON, SC – Now in its fourth year of heralding college football coaches who demonstrate sportsmanship, integrity and responsibility on and off the field, Liberty Mutual Insurance today named Clemson Head Coach Dabo Swinney one of 10 Football Bowl Subdivision finalists for the 2009 Liberty Mutual Coach of the Year Award. If he wins, Liberty Mutual will award Coach Swinney $50,000 to donate to the charity of his choice and a $20,000 grant to donate to the Clemson alumni association for student scholarships and activities. Winners will be announced January 6, 2010, in Los Angeles, in advance of the BCS Championship Game.

Between December 15 and December 29 fans can visit www.CoachoftheYear.com to vote among the finalists. Fan votes constitute 20 percent of a coach’s final score.

To ensure candidates are evaluated fairly and measured against the specific values of responsibility and integrity, selection committees of College Football Hall of Fame players and coaches – including Archie Manning, Lou Holtz, Vince Dooley, Ronnie Lott, and Jerry Rice – and the national college football media will also cast votes for the winners. Hall of Fame and media votes account for 55 percent and 25 percent, respectively.

Past winners, including Alabama’s Nick Saban (2008), Northern Illinois’ Jerry Kill (2007) and Pittsburg State’s Chuck Broyles (2008), have used their Liberty Mutual Coach of the Year Award money to help build homes in local communities, support children in need and even fight terminal diseases. Including the 2009 winners, Liberty Mutual will have donated nearly $1 million to support dozens of national and local charities and college scholarship funds on behalf of its Coach of the Year Award winners.