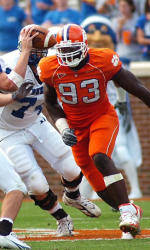 Vote for Clemson’s “Pontiac Game Changing Performance” and the Tigers Could Win $5,000

Down 14 points in the fourth quarter, Clemson pulls out an amazing comeback 27-17 win over undefeated Wake Forest. The rally was highlighted by an exceptional play that earned the Tigers a “Pontiac Game Changing Performance” nomination. Clemson defensive lineman Gaines Adams caused a fumble after a mishandled snap on a field-goal attempt, recovered the ball and returned it 66 yards for the score on the first play of the fourth quarter… a true game-changing performance that ignited the rally, swinging momentum back to the Tigers.

Now it’s up to the Clemson fans to determine if the Tigers earned the “Pontiac Game Changing Performance” for the sixth week of the 2006 NCAA Football Season. Clemson fans can go to www.pontiac.com/ncaa, where they can view video clips of the four finalists and vote for their favorite play. Voting begins on Sunday morning and ends at midnight on Wednesday. ESPN will announce this week’s “Pontiac Game Changing Performance” winner, on Thursday night, during the Pontiac Performance Halftime Report.

New to this year’s program is that, each week one lucky individual who visits www.pontiac.com/ncaa, will also win a $5,000 scholarship for them self or their family. In total, Pontiac will provide over $200,000 worth of scholarships to universities and individuals throughout the season.