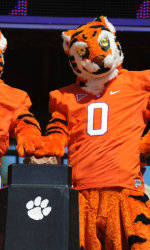 Howard’s Rock has advanced to the quarterfinal round of EA’s NCAA Football 12 Gameday Traditions Fan Voting Contest, after defeating USC’s Tommy Trojan & Traveler in the first round. Clemson’s tradition is now up against Michigan’s Go Blue Banner. Voting for the quarterfinal round will conclude on Tuesday, June 28 at 12:00 PM, and the winners will be announced that afternoon on SportsNation, which will air on ESPN2 at 4:00 PM.

ABOUT THE CONTESTThe top 16 traditions are now battling it out in a weekly, tournament-style showdown, with voting continuing through July 12. Every Tuesday, ESPN’s “SportsNation” will announce which traditions have advanced in bracket competition, with the winning tradition to be unveiled live on the show on Tuesday, July 12 – NCAA Football 12’s launch day.