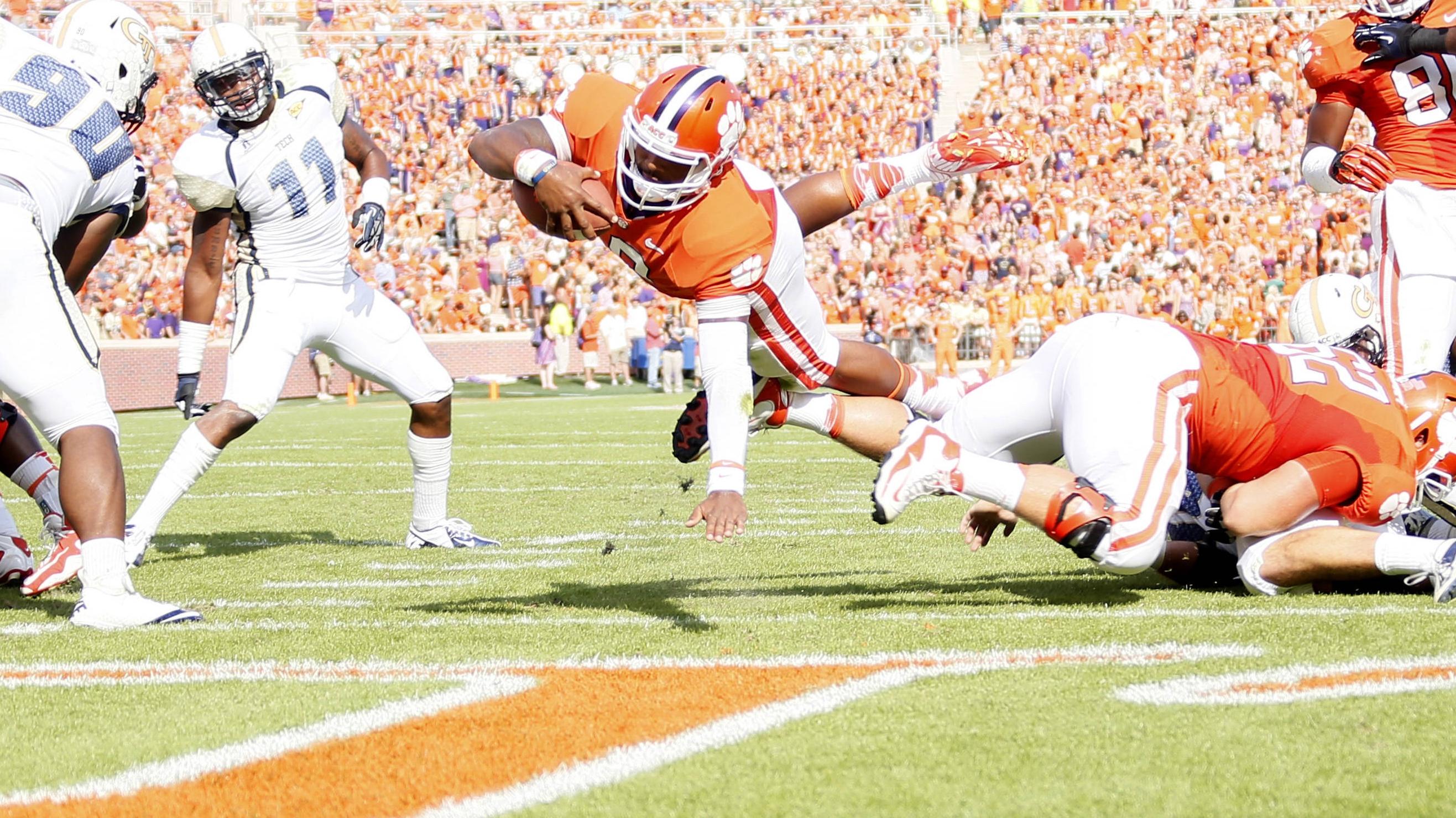 NEW ORLEANS, LA – Tajh Boyd was one of eight quarterbacks named a “Star of the Week” by the Manning Award, sponsored by the Allstate Sugar Bowl, this week. College football fans can now go to the Allstate Sugar Bowl Facebook page to vote for what they think was the best performance from this past weekend. When voting closes on Thursday at 11 a.m. (Central), the top vote-getter will be announced as the Manning Award Player of the Week.VOTE HERE!

The Manning Award was created by the Allstate Sugar Bowl in 2004 to honor the college football accomplishments of Archie, Peyton and Eli Manning. It is the only quarterback award that includes the candidates’ bowl performances in its balloting.This week’s eight Manning Award Stars of the Week are:

Tajh Boyd, Clemson26-of-41, 396 yards, 2 TDs, 2 INTBoyd recorded two passing touchdowns and one rushing touchdown in the Tigers’ 47-31 victory over Georgia Tech.  With his first touchdown pass of the game, a 58-yarder to DeAndre Hopkins in the second quarter, Boyd became Clemson’s all-time career leader in touchdown passes with 50.  He also passed for a career-high 397 yards in the game, a figure that ranks second in school history in passing yards.  In addition, Boyd rushed for a career-high 63 yards in the win over the Yellow Jackets.

Mike Glennon, North Carolina State30-of-55, 259 yards, 2 TDs, 1 INTGlennon struggled for much of the game, but came to life when it counted, driving the Wolfpack to the game-winning score by completing three fourth-down passes, including two inside the 15, in a 17-16 upset of No. 3 Florida State.

Jordan Lynch, Northern Illinois16-of-23, 195 yards, 1 TD, 0 INTLynch, who also rushes for 207 yards and three touchdowns, leads the Huskies back from a 23-13 second-half deficit by tallying three straight scores (one passing and two running) in a 35-23 road victory over Ball State.

Zach Maynard, California25-of-30, 295 yards, 4 TDs, 1 INTMaynard also rushes for a touchdown as he sets a career-best in completion percentage in a near flawless performance for the Bears, who upset No. 25 UCLA.

Josh Nunes, Stanford21-of-34, 360 yards, 2 TDs, 0 INTNunes rushes for three touchdowns, including a pair in the fourth quarter which tied the game and forced overtime where the Cardinal went on to defeat Arizona, 54-48.

Denard Robinson, Michigan8-of-16, 105 yards, 1 TD, 0 INTRobinson also rushed for 235 yards to become the Big Ten’s all-time rushing leader among quarterbacks as the Wolverines rolled to a 44-13 victory over Purdue.

Tyler Van Tubbergen, Western Michigan23-of-28, 283 yards, 5 TDs, 1 INTVan Tubbergen throws touchdowns to five different receivers and also rushes for a score as the Broncos roll to a 52-14 victory over Massachusetts.