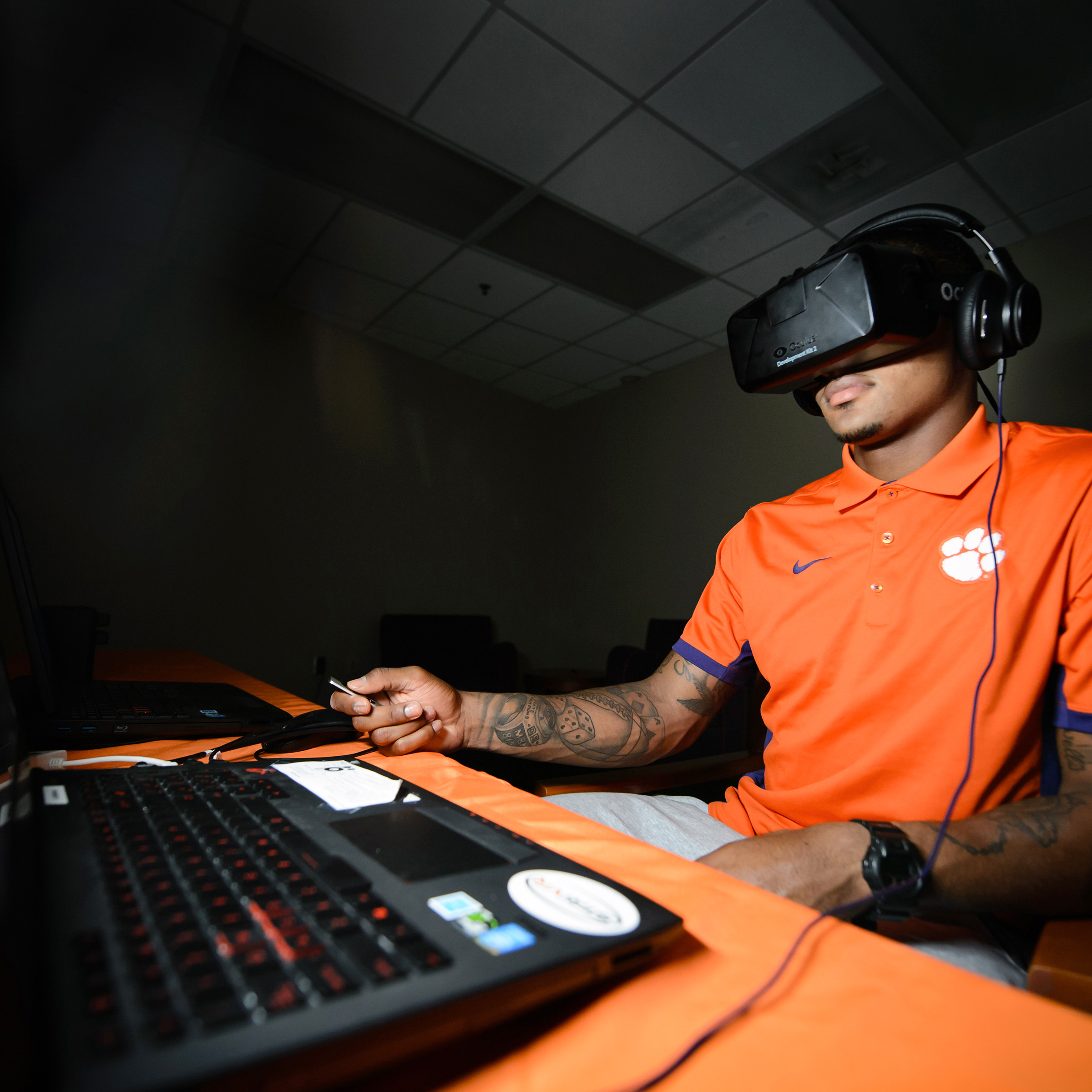 “Once I put the goggles on, it was amazing,” said Swinney, peering into the virtual reality software developed in 2014 at Stanford. “It’s like you’re really there.”

STRIVR Labs, Inc., was co-founded by a Stanford professor and two former Cardinal football players. On the home page of its website, STRIVR says it is committed to providing high school, college and professional sports teams with a virtual reality solution platform that is highly customized, technologically innovative and superior in quality to any other offering available.

The emerging technology includes the goggles, an audio headset and a remote control used for sifting through the various plays compiled into an online library. A tripod equipped with a GoPro camera is set up behind the line of scrimmage, and it ultimately gives Tiger players a 360-degree view of everything happening on a given snap.

“We use it primarily in 7-on-7 skeleton drills,” explained offensive player development assistant Cameron Aiken. “The players come in, put on the goggles and it’s like you’re there. We simulate opposing defenses through our scout team. As you move your head, you get a 360-degree view of the entire field.”

The idea of virtual reality is the latest in a long line of trends addressing the mental aspect of the game. And according to Swinney, it is the type of preparation that is long overdue.

“The mental part of the game of football is 50 percent of it,” explained Swinney. “You need to grow that. It’s been neglected for years, but now it’s really grown. Virtual reality is just another layer to that mental preparation.”

During the season, a big benefit of the virtual reality system has been for identifying blitz pickup.

“It’s great for Deshaun (Watson) to come in and see what blitzes are coming,” said quarterbacks coach Brandon Streeter. “He can see it over and over again, so it becomes an instinct when he gets into the game.”

“It’s good for them not only for blitz pickup, but also for feeling like they’re in a 7-on-7 rep,” he said. “They obviously don’t see as many reps as Deshaun during the season. It’s extremely valuable when we face the scout team, to see how the defense reacts.”

Clemson’s library of plays has grown immensely from the first time the system was used. Each week of practice, the formations and plays against the scout team are logged into the system, populating the library more and more.

When a Tiger player wants to come in and view a blitz package for an upcoming opponent, he can do that with a few clicks of the remote control.

“For anyone who wants quality reps, watching it on virtual reality as opposed to just regular coaches film helps it feel like you’re in the moment,” said Streeter. “And we take it with us when we travel, so our guys can use it. It’s valuable from that standpoint.”

Streeter’s prized pupil, Watson, has been a big proponent of the new technology.

“The guys from Stanford came and showed us, and I loved it,” stated Watson. “With my position, there is a lot of distraction around you. It helps you focus on what you need to see. You need to know where the blitz is coming from, so you can find a weakness in the opponent’s coverage. I’m preparing to play fast, and by using it, I’m able to react without thinking.”

Aiken said the Tiger coaches do not use the software in meetings, but the staff encourages players to come in and utilize it in their spare time. He sees it being a valuable offseason tool as the company continues to grow the technology and eliminate glitches.

Aiken also explained its value in recruiting. For example, a camera can be placed at the top of the Hill to simulate the experience of being at Death Valley in front of 85,000 fans during “the most exciting 25 seconds in college football.”

Swinney is glad he spared 20 minutes to see what Stanford’s coach wanted to show him. The trend will only grow, and there is little doubt that Clemson will be among the national leaders in adopting and using virtual reality technology in the future.