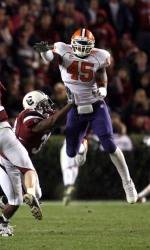 Vincent Will Not Return for 2008 Season

Clemson, SC – Clemson linebacker Cortney Vincent will not return for the 2008 season. A starter in 2007 when he helped Clemson to a top 10 ranking in total defense and scoring defense, Vincent had been suspended for spring practice for a violation of team rules. Monday, Head Coach Tommy Bowden announced that Vincent would not return in the fall.

“I had suspended Cortney Vincent for spring practice for a violation of team rules,” said Bowden. “We outlined some goals for Cortney this spring. While he would have been academically eligible to compete this year, he did not meet these goals during the spring semester.”

Vincent would have been a fifth-year senior at Clemson this fall. For him to continue his college career this fall he will have to transfer to Division II or Division III school.

Vincent ranked sixth on the Clemson team in tackles last year with 68. He started 12 of the 13 games and had seven tackles for loss and two sacks. He had a career high nine tackles in the victory over Louisiana-Monroe. With Vincent’s departure, Clemson will now have seven returning starters on defense.