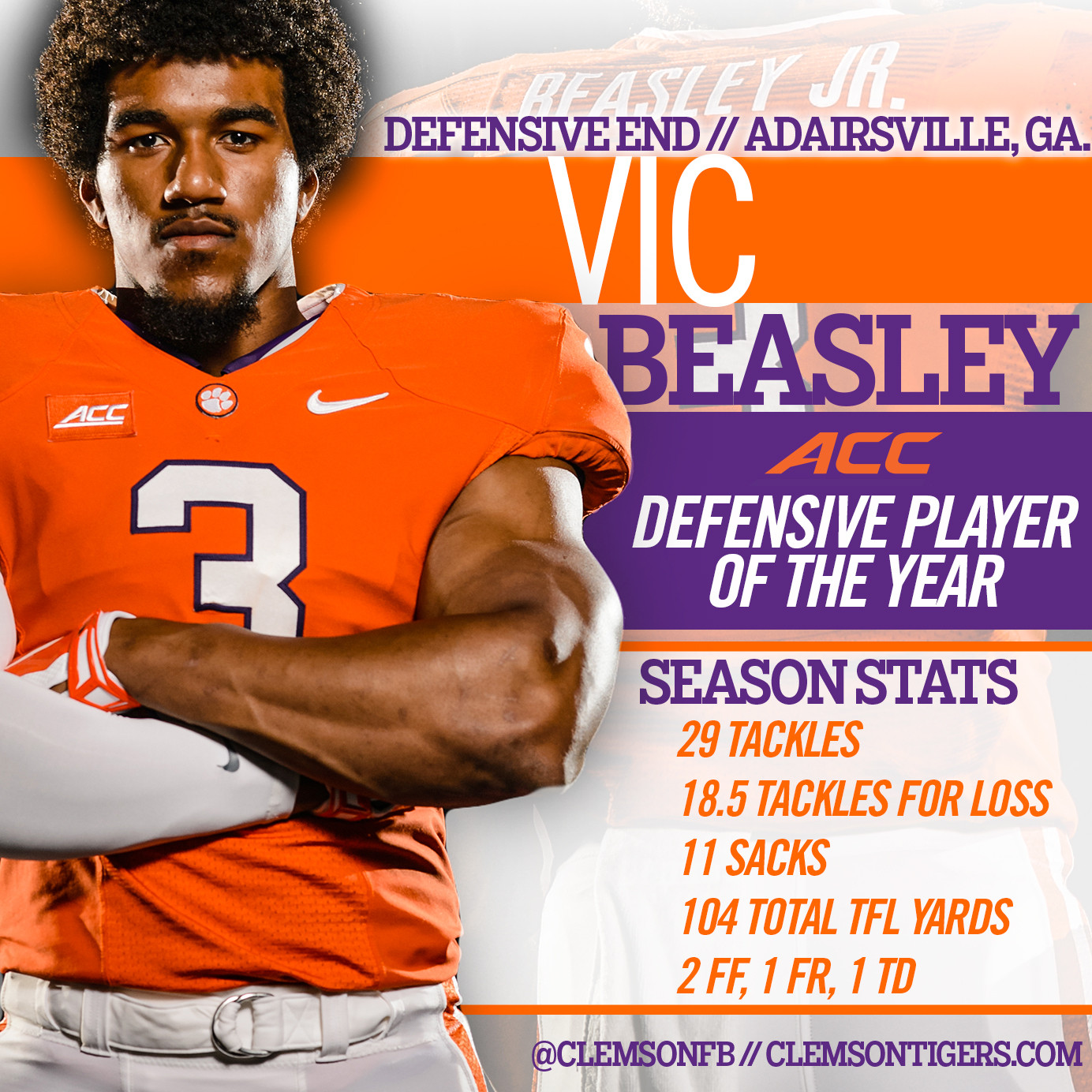 Clemson, S.C.—Clemson defensive end Vic Beasley has been named the ACC Defensive Player of the Year.  It is another in a long line of honors for Beasley, who is a finalist for the Lombardi Award and the Bednarik Award. He received more points for the All-ACC defensive team than any other player with 159 points. Beasley finished third in the overall ACC Player of the Year voting behind Pittsburgh running back James Connor and Florida State quarterback Jameis Winston.     Beasley received 24 votes for ACC Defensive Player of the Year, four ahead of Louisville’s Gerod Holliman who has an NCAA record tying 14 interceptions this year. Miami linebacker Denzel Perryman received seven votes, while Duke linebacker David Helton and Georgia Tech’s Nealy each received two. Despite special attention from most opposing offenses, Beasley leads the ACC in quarterback sacks with 11 as Clemson (9-3) prepares for its bowl game.  The native of Adairsville, Georgia also has 18.5 total tackles for loss this year to lead the conference.   He ranks 10th in the nation in both categories this year. The 6-foot-3, 235-pound Clemson graduate, holds the Clemson school record and leads all active FBS players with 32 career sacks.  Beasley’s 49.5 career tackles for loss have accounted for 292 negative yards, 62 more yards than any other active FBS player. “Vic came back for his senior year to graduate, and to have a great season and improve as an all-around player,” Clemson head coach Dabo Swinney said of Beasley. “He has done that – he is a complete player. He is a big reason we currently rank number-one in the nation in total defense and many other areas.  He is the best defensive player in the ACC, and I really feel he is the best defensive player in the nation.” Beasley is the seventh Clemson defensive player to be named either ACC Player of the Year or Defensive Player of the Year. Jeff Davis, a linebacker in 1981 and William Perry, a middle guard in 1984, were Clemson defensive players named overall ACC Player of the Year.  Keith Adams, a linebacker in 1999, Leroy Hill, a linebacker in 2004, Gaines Adams, a defensive end in 2006 and Da’Quan Bowers, a defensive end in 2010, join Beasley as ACC Defensive Player of the Year selections from Clemson.