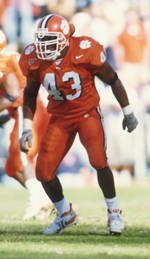 Upstart Clemson Out To Prove 1999 Was Just The Beginning

As No. 17 Clemson opens the season against The Citadel, the Tigers are geared to prove last years’ trip to the Peach Bowl wasn’t a fluke.

In his first year at Clemson, coach Tommy Bowden doubled the Tigers’ win total from their 3-8 campaign in 1998, despite a schedule that included unbeaten teams like Florida State, Virginia Tech and Marshall.

Bowden, the ACC Coach Of The Year, brought an unprecedented wide-open offense to the 17th-ranked Tigers, who are ranked in the preseason poll for the first time since 1993.

“I can see it. I can see 11-0,” defensive lineman Terry Jolly says. Bowden, however, isn’t getting greedy. “I would think finishing in the top 25 at the end of the year would be a realistic goal,” said Bowden, who produced an undefeated season at Tulane in 1998.

If Zachery can repeat his 16 touchdown production from last season, challenging ACC juggernaut Florida State, coached by Bowden’s father and mentor Bobby Bowden, might not seem so farfetched.

Ninth in the nation in scoring, the junior running back is Clemson’s top returning rusher with 1455 career yards, including a team-best 820 last year. Zachery actually had 827 in 10 regular season games last year, then had -7 in the loss in the Peach Bowl to Mississippi State when he suffered a dislocated elbow, allowing him to play just five snaps.

Defensively and off the field, Bowden is looking toward hard-hitting linebacker Adams for leadership. He led the nation with 186 tackles a season ago – 35 for losses.

“You like to say you’ve got a switch and your motor runs 1 through 10,” Bowden said of the 5-foot-10 Adams. “He plays at 10 every snap, at practice and in the games. He walks up and down the sidelines at a 7. He can’t even cut it down to a 3 or a 4. He brings the intangibles like how you play the game with heart.”

The Tigers are looking for their 14th straight win over The Citadel, which is coming off a 2-9 season.

The Division I-AA Bulldogs, under fifth-year coach Don Powers, are a far cry from its No. 1-ranking and Southern Conference title in 1992. They’ve had just two winning seasons since then, and are starting the year against a team they haven’t beaten since 1931.

Defensive tackle Mario Richardson says the team is determined to add to The Citadel’s successful history – not its recent history.

“We’re out to restore some pride,” he said. “We feel like we can get back to where The Citadel was in the early ’90s.”