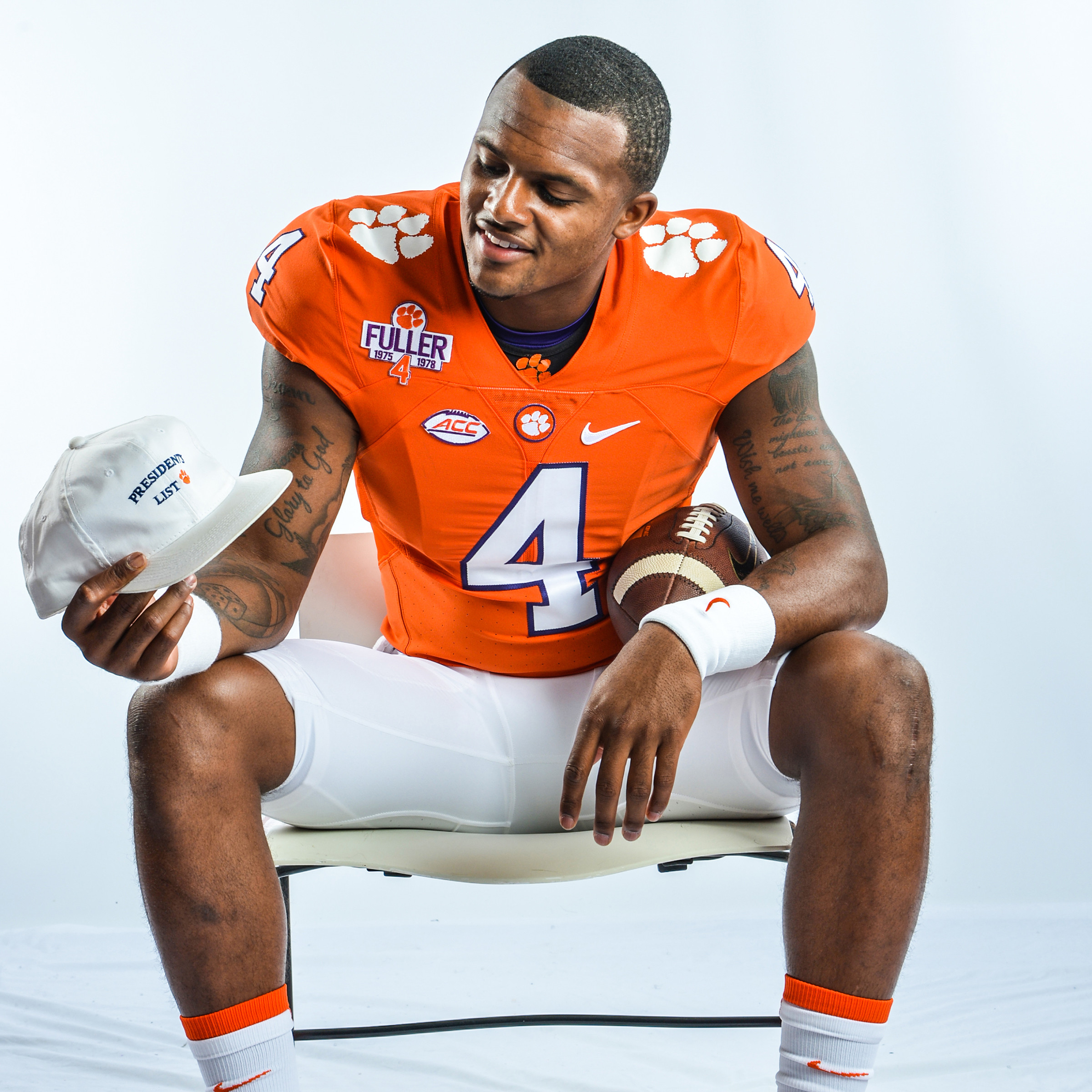 Deshaun Watson’s calendar has been full since he exited the locker room in the early morning hours of January 12 in Glendale, Ariz. He came within six points of leading the Tigers to a national championship and the first 15-0 record in FBS history.

It comes with the territory when you are a Heisman Trophy finalist and the face of college football in 2016.

First came the award ceremonies. He accepted the Davey O’Brien Award on February 15 in Fort Worth, Texas. He followed that on May 17 by heading to New Orleans, La., for the Manning Award ceremony.

Secondly, there were the summer camps. He served as a college counselor at the QB Retreat in San Diego, Calif., from May 27-29. He followed a few days later, June 3-5, in Los Angeles for the Elite 11. He traveled to Thibodaux, La., for the Manning Passing Academy from June 23-26.

Finally, he ended his “offseason” with a pair of high-profile media events. He and Ben Boulware represented the Tigers at the ACC Kickoff in Charlotte, N.C., on July 22. Five days later, he boarded a plane to Bristol, Conn., for a full slate of appearances across various ESPN platforms.

And oh yeah, we forgot to mention that he took 17 credit hours over the summer, leaving him just five short of graduating in two and a half years.

“He took a full course load this summer, when most guys take it easy,” said head coach Dabo Swinney. “Now he’s going to graduate…are you kidding me? But that’s who he is. He’s very focused and very driven.

“And he just so happens to be a good football player.”

Watson has rewritten the Clemson recordbooks since he stepped on campus, highlighted by an All-America sophomore season. In all, he holds 39 game, season and career records heading into his junior campaign.

He broke the ACC record for total offense in 2015, accounting for 5,209 yards on the ground and through the air. On top of that, he became the first player in FBS history with at least 4,000 passing yards and 1,000 rushing yards in the same season.

What can he possibly do for an encore?

“It’s hard to be perfect, but speaking for myself, I can get more yards and take less sacks,” he admitted. “I can be a better leader.”

It seems awfully nit-picky for the player Alabama head coach Nick Saban tabbed the best college football player since Cam Newton, but Watson is adamant on living up to his own expectations, not anyone else’s.

“Each year is a different season,” said #4. “We know we have a target on us and we’ll have to go 10 times harder than we did last year. Everyone must be on the same page, because nothing will be given to us. We have to go earn it. If you take care of the little things, then the big things take care of themselves.

“Best is the standard, and coach Swinney has been preaching that for the past eight years. This is what we’ve been building toward.”

Watson has been a Tiger for just over two seasons, but he first committed to the program as a sophomore at Gainesville (Ga.) High School. His love and loyalty have never wavered since.

Even when his recruiter and offensive coordinator, Chad Morris, left to take the head coaching position at SMU, Watson did not bat an eye and continued along his path with laser-like focus.

Swinney was not surprised by his loyalty. It perfectly represented the Watson he got to know during the recruiting process.

“I’ve known Deshaun since the ninth grade, and he committed to us a year later,” stated Swinney. “I told him, ‘Whoa, you’re only a sophomore, that’s a long time to commit.’ I actually didn’t want him to commit at the time, but he never wavered.”

Watson felt comfortable in Swinney’s care after attending a summer camp in Clemson following his freshman season in Gainesville. He enrolled early in January 2014, one week after the Tigers defeated Ohio State in a memorable Orange Bowl battle.

“I wasn’t taking any official visits as a senior in high school, so that was a major relief,” he said.

His grooming began long before stepping foot on campus. Watson was a former ballboy for the Atlanta Falcons, and he has fond memories of attending training camp in Flowery Branch, Ga., just 20 minutes from his hometown.

He remembers observing the professionalism of Matt Ryan, a former Boston College star and current standout quarterback for the Falcons.

“That had a lot of impact,” said Watson. “It showed me at that age that this is where I wanted to be one day. I saw how much time and effort and preparation they put into it. It motivated me to think one day I could be in that position. To pick people’s minds was very special.

“Every day, the way Matt Ryan warmed up and came out was special. Seeing Roddy White and Julio Jones be so crisp and detailed, I knew it was another level. Only special people make it to that level. It was a blessing for me to be around it. It opened up my eyes and made me take it to another level.”

A testament to his work ethic, Watson weighed only 182 pounds when he enrolled at Clemson. In a summer workout just prior to the ACC Kickoff, the signal-caller checked in at a chiseled 218 pounds.

But that is not the only testament to the type of effort he puts into each and every day. Remember the torn ACL he suffered against Georgia Tech as a freshman in 2014? He ended up playing with virtually one healthy knee a few weeks later against rival South Carolina. All he did was account for four touchdowns and help break a long losing skid to the Gamecocks. He would go on to set a Clemson record by taking 1,121 snaps the next year.

The inspiration behind his play and his drive on the field and in the classroom comes from his mother, Deann, who overcame being a single mother who was faced with both financial hardship and cancer.

“I understand the struggle, because I’ve seen it through my mother,” he said. “She never gave up, stayed strong and positive. She’s inspired me and is my rock. She really made me the man I am today.

“That’s why I don’t take this game or platform for granted. I have to earn the right to fulfill the dreams I have and accomplish my goals. This is a once in a lifetime opportunity, because God put me in this position.”

As Watson prepares to take the field for the first time with his teammates at Auburn on September 3, he cannot help but think of the potential that lies ahead for a talented group of offensive players.

“We have a great wide receiver corps with a lot of talent coming back and a lot of potential,” said Watson. “We have a lot of depth with young guys who can compete in camp for positions. We’re not going to be given 40 points every Saturday because of the talent we have, so it comes down to us executing and grinding at a high level.”

If he grinds at a similar level that he did his sophomore season, his trophy case could add even more prestigious awards to it.

But that is not what drives an uncommon, undistracted athlete like Watson.

“Winning the Heisman Trophy would be cool, but it’s not the main priority,” added Watson. “The focus is on winning the national championship. Clemson is about being the best.”