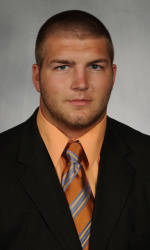 He played in 13 games, two as a starter in 2011, helping the Tigers to the ACC Championship and four wins over top 25 teams. He had 29 tackles and played 300 defensive snaps. For his career he has played 25 games.

Shatley, a native of Icard, NC, was the strongest player on the Clemson team last year in terms of total weight lifted in all areas combined. He tied for first in the bench press with a 450-pound figure. He was also second in the power clean at 300 pounds.

Tyler has proven to be one of Clemson’s most dedicated athletes,” said Clemson Strength & Conditioning Coach Joey Batson. “His hard work, discipline and determination have earned him regular playing time. Tyler has set the bar for other athletes to reach and he has displayed a passion for strength training that is spreading among his teammates.”

Shatley has already earned the team’s Most Dedicated and Freshman Power Hour Lifter of the Year awards.