It was the summer of 2004, and Clemson camper and now Wide Receivers Coach Tyler Grisham, a rising senior in high school from the Birmingham, Ala. area with no Division I college offers, shocked those in attendance with his 40-yard dash time.

All of the stopwatches were under 4.5, including some at 4.44, a time the Clemson roster of wide receivers could not match, with the exception of Airese Currie.

“Coach (Tommy) Bowden and the other coaches on staff at the time were big on having the campers run the 40,” recalled Dabo Swinney, who was in his second year as wide receivers coach on Bowden’s staff.

“When he ran that first 40, the coaches couldn’t believe it, so they made him run it again. When he was sub 4.5 the second time, they had him run it again. On the third run, a lot of coaches came over to see it, including Coach Bowden.

Those might have been the most important sprints of Grisham’s football career…even more important than any run during a game in his Tiger career.

“I had known him since he was in second grade,” said Swinney. “I met his dad through my brother when I was an assistant coach at Alabama, and Tyler came to the Alabama summer camp every year. He was always the smallest kid in camp, but he was the smartest, the quickest and the most locked-in kid we had.

“When I came to Clemson, there was Tyler in camp as a high school player. He was still small, but he was also still the quickest and the smartest.

“I had been telling Coach Bowden this kid could play. But he had no other offers, so it was a tough sell. But when Coach Bowden saw him run, everything changed.

“By the end of camp, Coach Bowden said we could offer him. We did in his office, and he committed on the spot.”

Grisham recalled it was a very easy decision.

“I had known Coach Swinney since I was a kid. My dad used to sit in his seats at Alabama games.

“I knew he was a great man and phenomenal coach. People trusted in him and believed in him. Plus, he was going to be my position coach. I knew I would get the holistic development from him.”

Grisham played 11 of the 12 games as a freshman in 2005, missing only the South Carolina contest with a back injury. He backed up Chansi Stuckey, who is now on the staff, most of the year.

Grisham came back to play 28 snaps in the bowl game against Colorado and had two receptions for 34 yards, helping the Tigers to a victory that moved Clemson into the top 25 of the final AP poll.

He started six games in 2006 and finished the season with 25 catches for 264 yards and three touchdowns. He was the third-leading receiver on the 2006 team that featured the running game of James Davis and C.J. Spiller.

Swinney always impressed upon his wide receivers the importance of blocking to the position. Grisham had one of the top blocking seasons ever by a Clemson wideout in 2007, as he finished with 68.5 knockdown blocks, more than any other non-offensive lineman. He also had 15 in one game against Maryland.

“Tyler was such a good tactician,” said Swinney. “He was precise in running his routes, had great ball skills and was a terrific blocker even though he was not very big.”

The Tigers finished the 2007 season ranked in the top 25 once again. 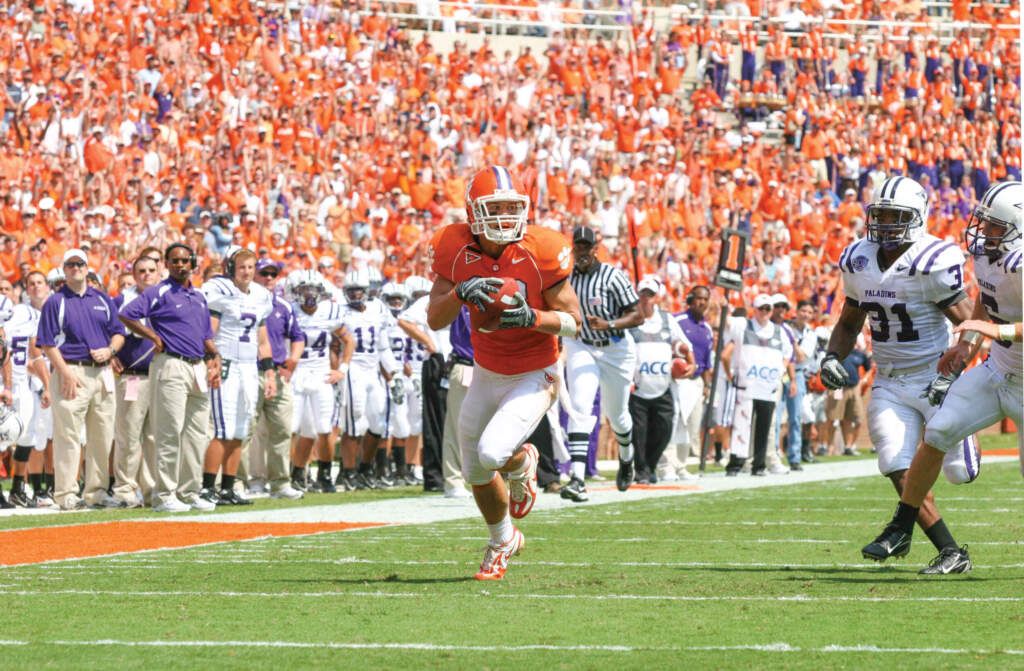 The 2008 season was a tumultuous time for the Tiger program, as there was a change at head coach in October. Swinney was named the interim head coach on Oct. 13. Grisham, one of the seniors and a team leader, was one of the players responsible for holding the team together.

“It was a trying time when the change was made,” admitted Grisham. “I had lost my position coach, but gained a head coach. I was excited for Coach Swinney to get the opportunity, and I was excited to see him coach in this large setting.

“I knew it would be challenging, but God had prepared him for this challenge. He had been through a lot in his life. He made strong, tough decisions, even unconventional decisions, but he stood firm.

One of the important victories for Swinney down the stretch in his drive to become the head coach on a permanent basis was a 13-3 win at Virginia. Grisham scored the only touchdown of the game on a 15-yard pass from C.J. Spiller.

It was probably the biggest play of his career, but when asked about his fondest memories as a Tiger, Grisham went in a different direction.

“My proudest moment at Clemson was being named a captain my senior year. That was a special honor. To have that ‘C’ on my jersey meant a lot.

“Making bonds with the guys…that is what I cherish the most. I loved the summers grinding with my teammates. Those were special relationships. A lot of those guys were in my wedding.”

Grisham finished his career with 132 receptions for 1,390 yards and eight touchdowns. He played 50 games, and he had at least one catch in 42 games, including 25 of the last 26 contests.

His name was not called on draft day, but he did sign a free-agent contract with the Pittsburgh Steelers. He was on an NFL roster for four years until an injury cut short his career.

“I think he could have had a career like Adam Humphries is having if he had not gotten hurt,” said Swinney.

The comparison to Humphries is appropriate. Grisham started the tradition of slot receivers at Clemson wearing #13. He was the first to wear the number at that position in 2005. Humphries and Hunter Renfrow have continued the tradition into the NFL.

When his NFL career ended, Grisham put his degree to use and took a job with a lumber company.

“When the NFL was over, I was coming off a knee surgery with my wife and newborn. For me, the first thing to do was to get a job, and I took one with U.S. Lumber in Atlanta, Ga. for 18 months.

“In my off time, I volunteered as a junior varsity coach at a local school, and we had a great year, going undefeated. I worked Coach Swinney’s camp in the summer and really enjoyed working with young men and helping them improve. I really hadn’t thought about coaching when I was player.

“In 2014, I got a call from Coach Swinney and Coach (Jeff) Scott, and they asked me if I wanted to come back as a graduate assistant.”

That opportunity led to a position as an analyst. In January, Scott took the head coaching position at South Florida, which led to Swinney’s offer to Grisham to become the wide receivers coach.

“I was working on video of Ohio State in my office. I really hadn’t thought much about the position because we were all so busy getting ready for the playoff.

“One day, Coach Swinney came into the office. ‘Hey, I believe Jeff has a great opportunity to go to South Florida, and you are going to be next wide receivers coach. Be ready!’

The snap decision was made just as he had when he was offered a scholarship by Swinney and Bowden a few hundred yards away 16 years earlier in Memorial Stadium.

Grisham has the confidence to continue the great legacy of the position. One of the reasons is his experience in the NFL.

“I was able to be around guys like Hines Ward with the Steelers. He shared his knowledge and I was able to see his work ethic and how he challenged his fellow wide receivers to be well rounded. Ward was a great blocker, and he put a lot of time into it.

“I can now communicate that with our players at Clemson. I know what is required to be excellent.”

Grisham is also off to a good start as a recruiter. That is no surprise to Swinney.

“Tyler is very personable and pays attention to detail,” stated Swinney. “He is a great communicator, and that is very important. His experience in the NFL and his success at Clemson give him credibility with recruits.”

Swinney has every confidence in Grisham.

“I see a lot of myself in Tyler.

“He was such a technician as a player and took coaching and applied everything we taught him. It has been so much fun seeing him pass that on to our players today.

“The guys love him and respect him. He has a great future in this profession. He is the type of person this profession needs. He has great integrity and loves developing young people.”