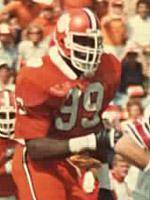 Six football figures, a baseball slugger and a tennis standout comprise the class of 2004 for induction into the South Carolina Athletic Hall of Fame.

The eight luminaries will be inducted at the SCAHOF annual banquet on May 20 at the Embassy Suites hotel in Columbia. Tickets, priced at $500 for a table of eight, or $80 per person, can be purchased by contacting the hall of fame at 803-779-0905. Information about the SC Athletic hall of Fame can be found at www.southcarolinaathletichalloffame.org. Annual awards for top pro and amateur athletes from the Palmetto State will also be presented along with special citations.

Sheridan,a North Augusta native, began his coaching career at Eau Claire High and coached at Airport and Orangeburg-Wilkinson before entering the college ranks at Furman and compiling a 69-23-2 with eight SoCon titles before turning North Carolina State into a perennial bowl team.

Thomas, who played at Cardinal Newman High and James Island High, enjoyed a 13-year Major League career and clouting 268 home runs. He made the 1981 All-Star team and hit more homers (143) than anyone in baseball from 1979-82.

Morris, previously a member of four halls of fame, ranked No. 14 in the world in pro tennis in 1956 while reaching the quarterfinals at Wimbledon. Scott, a Newberry native, starred at tight end for the Gamecocks and became a No. 1 draft pick of the Kansas City Chiefs in 1980.Addison, a charter member of the AFL in 1960 with the Boston Patriots, enjoyed an All-Star career and became the first president of the AFL Players Association.

Bryant, a defensive bulwark at tackle on Clemson’s national championship team, became a first-round selection of Seattle and played 11 seasons with the Seahawks, still ranking No. 2 in team history in sacks. Gaskin, a three-sport star at Clemson, made former coach Frank Howard’s all-time team.

Brown, from John’s Island in Charleston, set pass-catching records at South Carolina State before becoming an NFL Pro Bowler and key cog in the Washington Redskins Super Bowl teams of 1983 and 1984. For his career, Brown caught 220 passes for 3,548 yards and 25 touchdowns.