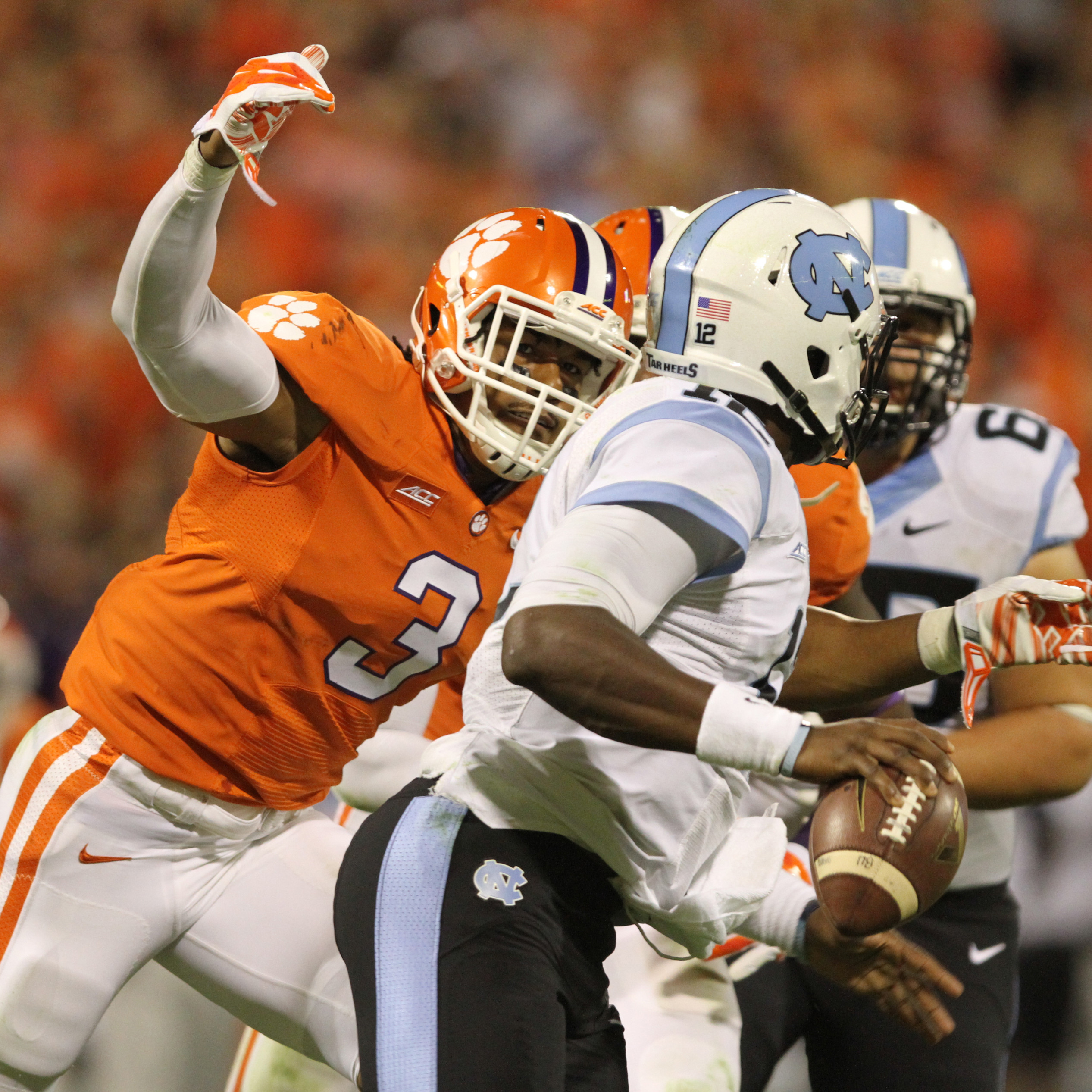 Note: Each Tuesday, we follow two storylines from the interview session in the WestZone leading into the upcoming football game for the Tigers.

Vic Beasley came into the 2014 season needing seven sacks to tie Michael Dean Perry and Gaines Adams for the career record of 28 by a Clemson player.

With back-to-back two-sack performances, the defensive end has compiled six just four games into his senior season. He’ll suit up for Saturday’s 3:30 kickoff against NC State just one shy of tying the duo and two away from being the program’s sole leader.

“It’s a blessing to be mentioned among the greats like Gaines Adams and Michael Dean Perry,” he said.

Coincidentally, six of his 27 career sacks have come against the Tigers’ opponent Saturday, NC State. He posted three in Clemson’s home win in 2012 and followed with three last September in a road win over the Wolfpack. He also caused a fumble and broke up two passes, which led to being named Bednarik Award National Defensive Player of the Week.

Beasley’s success is both a testament to his overall ability and the talent level of Clemson’s entire defensive front, which poses threats from all angles.

“He’s a guy that’s come a long way and taken advantage of his opportunities,” said defensive tackle Grady Jarrett. “He’s special, and his play on Saturdays shows that week in and week out.”

Much has been made of Clemson’s rushing attack, which has averaged just over 137 yards per game this season. The Tigers have suffered serious personnel setbacks at the position the last two seasons, including an Achilles tear and back injury to Tyshon Dye and an ACL tear in August camp to Zac Brooks.

The coaches will be the first to tell you the above note is not an excuse, merely a fact. But another factor in the Tigers’ lack of yards on the ground can be attributed to freshman quarterback Deshaun Watson. Because opposing defenses are crowding the box and daring Watson to beat them through the air, opportunities have been far fewer on the ground.

“I love who we have at running back,” said Dabo Swinney. “As we prove we can beat people through the air it’ll open up more opportunities.”

C.J. Davidson has gotten the most opportunities to date, leading the team with 36 carries. He said the tailback by committee approach has kept the competition open amongst the players.

“We’re going to continue to go with what the coaches say about who has the hot hand,” he said. “We will continue to motivate each other as players to do better.”

Several players Monday predicted the Tiger ground attack is on the verge of a breakout performance, including emerging wide receiver Germone Hopper.

“The run game is a big part of our offense, and it’ll be picking up soon,” Hopper said. “We’ve been working hard at it.”