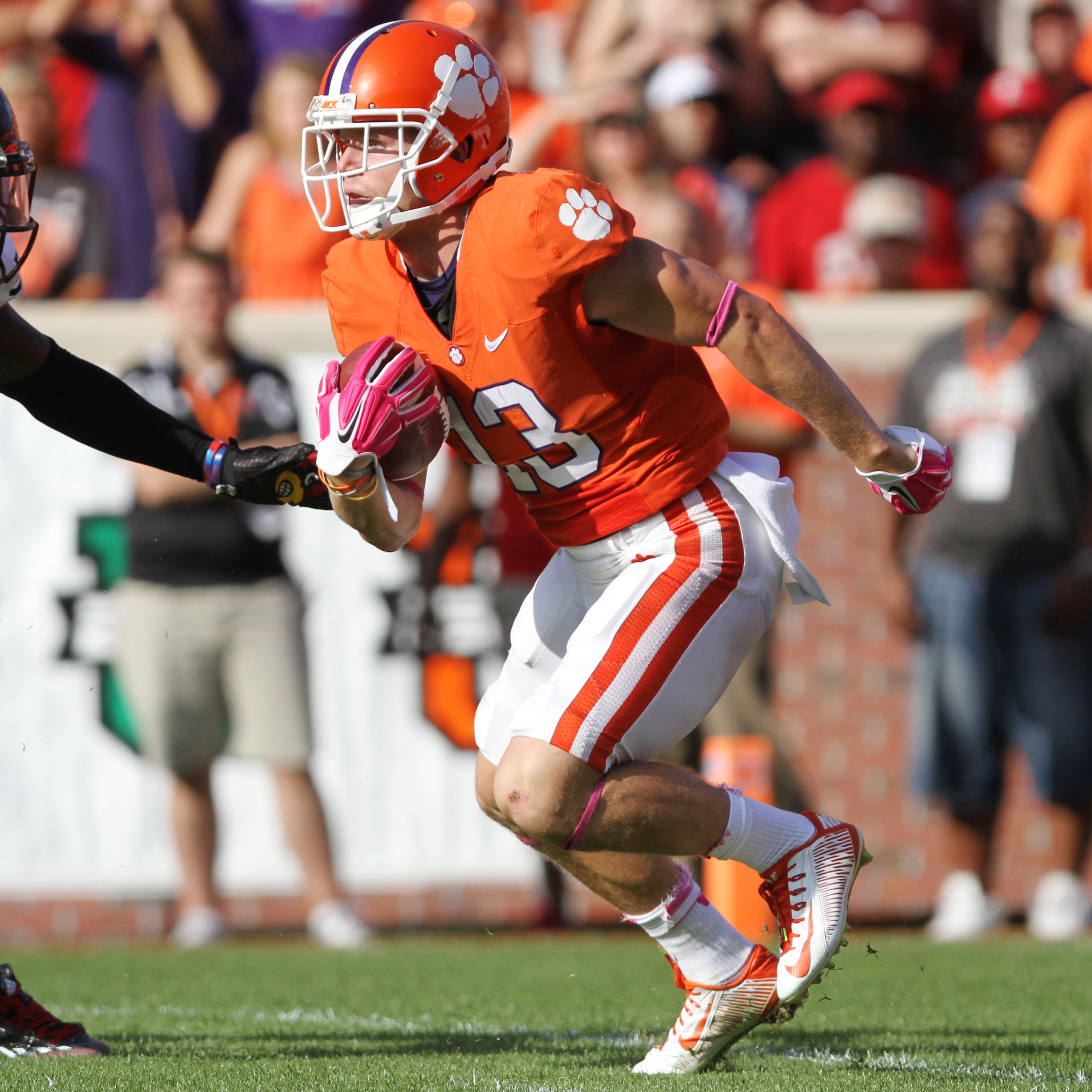 Note: Each Tuesday, we examine two storylines heading into the upcoming game. The Tigers take on Boston College in Chestnut Hill, Mass., on Saturday, Oct. 18 at 3:30 p.m. in Alumni Stadium.

One of the trends stemming from Clemson’s play of late has been the increase in productivity from the punt return unit. After fielding just five punts through the first three games, the Tigers have netted 16 returns the last three games alone.

Some of those numbers can be attributed to facing better punters, who have a tendency to kick it further. Some of it stems from Clemson’s defense forcing a number of quick three-and-outs to flip field position. But most of all, it can be attributed to return man Adam Humphries and the blockers in front of him.

Humphries racked up 107 yards in Saturday’s win over Louisville and took one to the house, going 72 yards for his first collegiate punt return for a touchdown. It was Clemson’s first since C.J. Spiller donned the orange and white in 2009.

“I was looking over my shoulder and I had guys chasing me, but they couldn’t quite get me,” said Humphries, reflecting on his first punt return for a score since his junior season at Dorman High School. “It was good to keep my feet and finally get into the endzone. It’s awesome to be able to impact a game like this. To find points through special teams is a big deal.”

Humphries’ score came on his 50th career punt return as a Tiger. He was named ACC Specialist of the Week on Monday as a result of his efforts.

“That’s a huge honor within a great conference like this,” he said.

Clemson will have another major test on its hands defensively. Boston College quarterback Tyler Murphy is currently 14th nationally in rushing, averaging 118.5 yards per game.

Murphy has averaged over eight yards per carry in leading the Eagles offense. Against Southern Cal, he produced 191 rushing yards in an upset over the favored Trojans in Alumni Stadium.

“He’s a very versatile quarterback,” said defensive end Vic Beasley. “We need to get him into throwing situations, because he’s more comfortable running the ball.”

So is the entire BC offense, as the Eagles net over 315 yards per game via its ground attack. Containing the run will once again be an emphasis for the Tiger defense, which has yielded strong results in that area since the opener at Georgia.

“They do a lot to force you to be disciplined to where you can’t tee off on people,” said defensive coordinator Brent Venables. “They’re purposeful and patient.”

And the Tigers will have to match that purpose on Saturday in Chestnut Hill, as they look for their first road win of the 2014 season.

“To take the next step in our season, we’ve got to win on the road,” said head coach Dabo Swinney. “We’ve come up short twice. We’ve got to finish.”