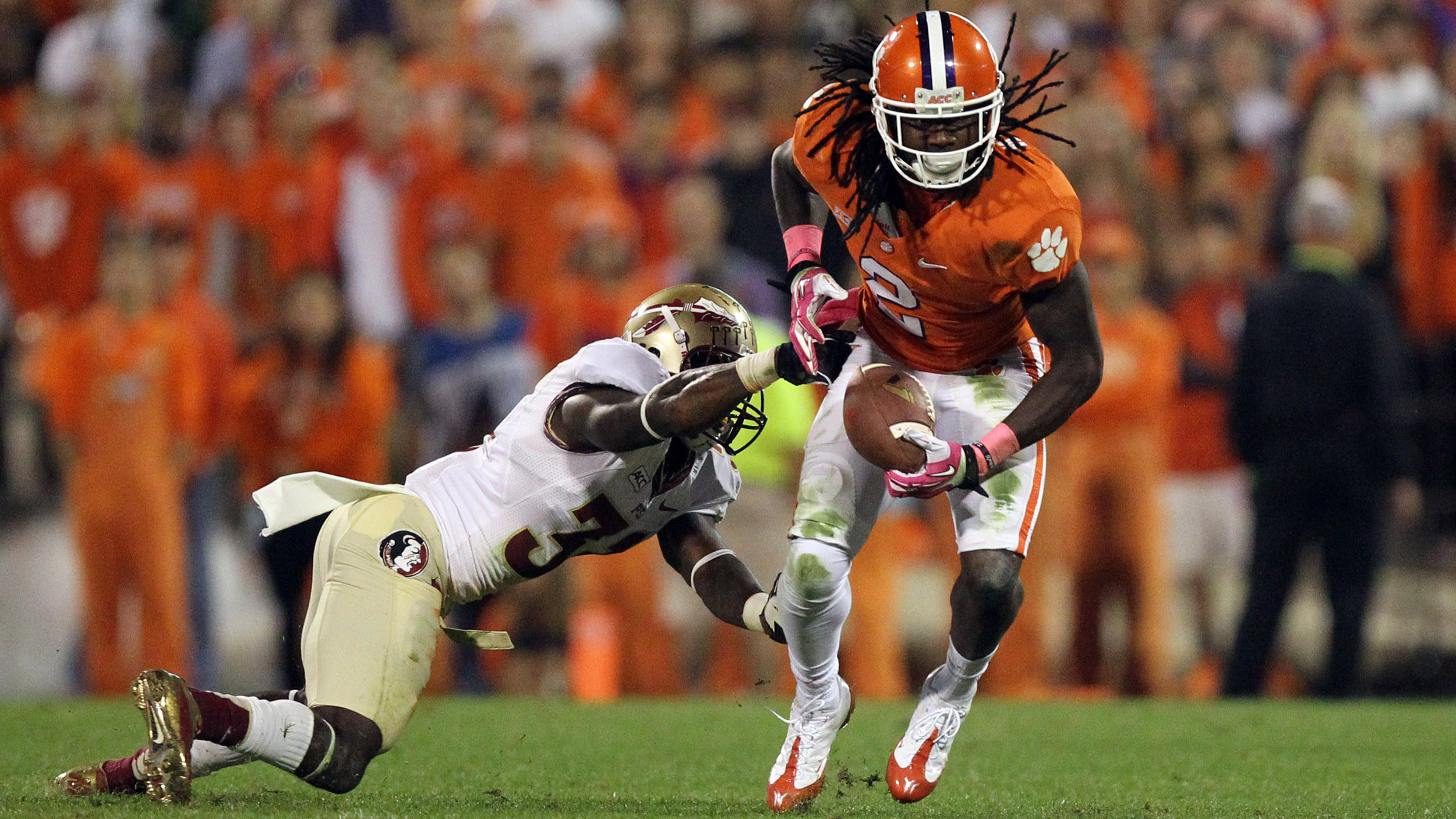 Turnovers Costly for Tigers in Showdown with Florida State

CLEMSON, SC – The turnover battle had been a big part of the formula for success in Clemson’s unbeaten start to the season. It was just as key an ingredient in its loss to Florida State on Saturday night.

In the first clash of top-five teams in Death Valley history, Clemson turned the ball over three times in the first half – more than it had in an entire game all season – and never recovered, as it fell to Florida State 51-14.

“That’s something we haven’t done. We haven’t turned the football over,” Clemson offensive coordinator Chad Morris said. “In a game of this magnitude, if they would have turned the ball over to us, it would have been just like that with us. You don’t take two top teams like that and give anybody anything, and we just basically handed them some freebies.”

Clemson had won five straight home games in the series with the Seminoles and had turned the ball over just six times in those contests. By contrast, it committed four turnovers Saturday, and Florida State scored the most points by an opposing team in Memorial Stadium history.

The turnover woes began for the third-ranked Tigers (6-1, 4-1 ACC) on the first play from scrimmage, as Stanton Seckinger fumbled after a reception to open the game.

Florida State recovered the fumble at the Clemson 34, and three plays later, it found the end zone on a 22-yard pass from Jameis Winston to Kelvin Benjamin for a 7-0 lead just 82 seconds into the game.

After the Seminoles made it 10-0 with a field goal, Clemson coughed up the football again. Mario Edwards picked up Tajh Boyd‘s fumble and rumbled 37 yards for a touchdown to give FSU a 17-0 lead with 3:07 still to go in the first quarter.

“When you spot a team that good 17 points, it’s a huge uphill challenge,” Tiger head coach Dabo Swinney said. “We never could swing the momentum back in our favor, and turnovers were a huge part of that.”

Clemson stemmed the tide briefly by putting together an 11-play, 65-yard drive, and it scored its first points of the game on a two-yard slant from Boyd to Sammy Watkins, who made a juggling grab in the end zone.

But the Seminoles added a long touchdown from Winston to Rashad Greene in the second quarter and a field goal just before halftime, and they took a 27-7 edge into the break.

Boyd had been intercepted deep in Florida State territory late in the second quarter for a third first-half turnover for the Tigers, which were more than they’d had in an entire game all season to that point.

Clemson came into the game ranked fourth nationally in turnover margin at plus-1.5 per game, as it had forced 15 turnovers and only given away six.

The Seminoles scored on the opening drive of the second half to make it 34-7 on a 17-yard pass from Winston to Greene.

Clemson committed its fourth turnover of the night when Boyd was picked off by Ronald Darby midway through the fourth quarter.

For the game, Boyd finished 17-of-37 passing for 156 yards with a touchdown and two interceptions.

“I just didn’t perform the way I was capable,” Boyd said. “As a leader, it’s my job to go out and lead and perform, and I just didn’t do that tonight. There were a couple moments that I would like to have back, but you just have to keep on working.”

Winston scored on a four-yard run a few minutes later to make the score 41-7 with 4:04 still to go in the third quarter.

Florida State added another touchdown early in the fourth quarter on a two-yard run by Devonta Freeman, and it tacked on a field goal with 4:41 to go to make it 51-7.

The 51 points by the Seminoles were the most ever scored by an opposing team in Memorial Stadium, surpassing the 48 points that NC State scored last season in a 62-48 Clemson win.

Cole Stoudt engineered a 16-play, 71-yard march for the Tigers and finished it off himself with a two-yard plunge with 13 seconds left to provide the final margin.

For the day, Clemson’s offense managed just 326 yards of offense, while FSU rolled up 565. The Tigers’ 14 points were the fewest they have scored in conference play since 2011 at NC State.

“Having those types of mistakes against a great team, you won’t win,” Watkins said. “Those two turnovers really hurt us, but it’s more than just those turnovers. We as an offense never got started, never got clicking, and I think as an offense we hurt ourselves. We’ve got a lot of things as an offense to go over and fix.”