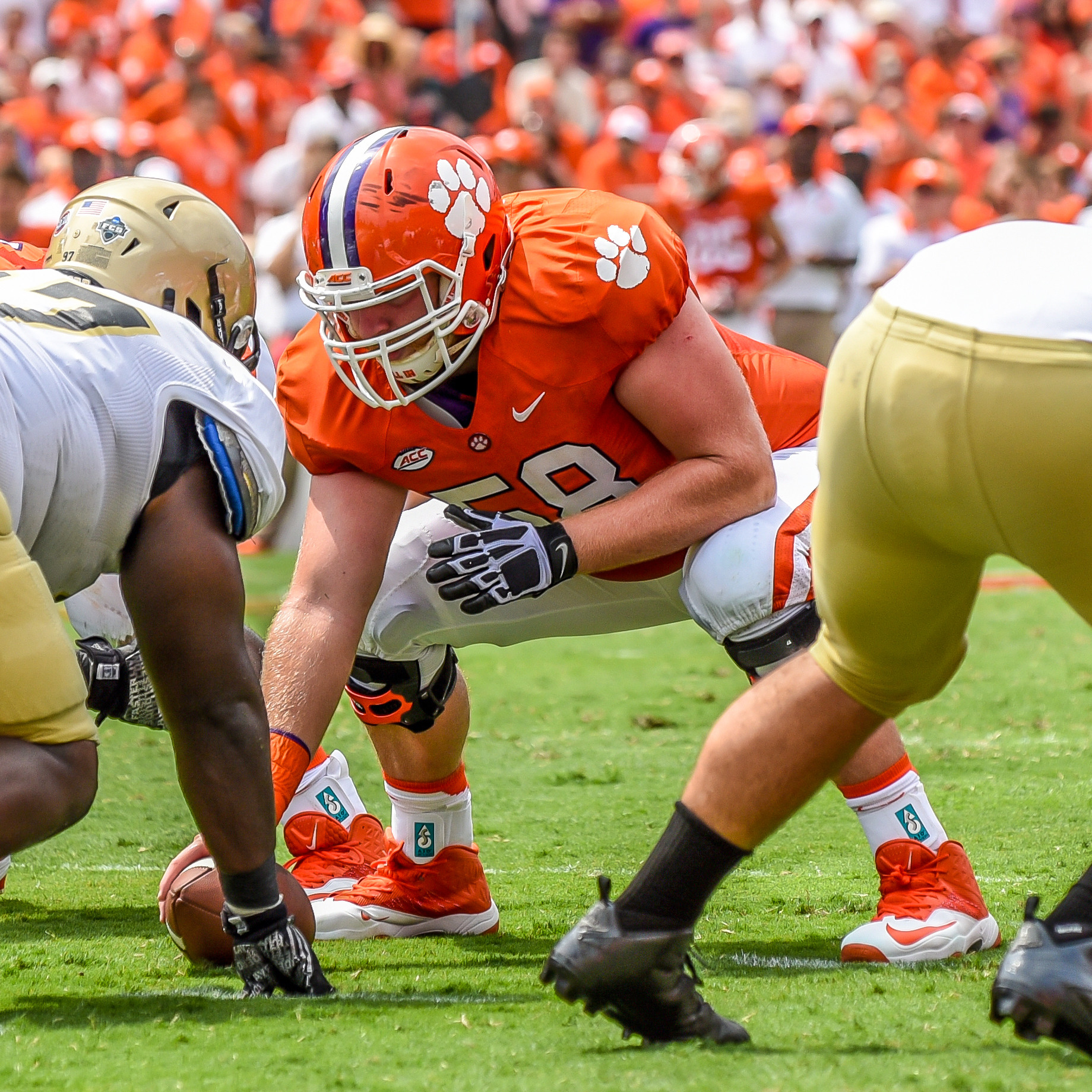 An old soul is often described as a person who is wise beyond their years and has a deep understanding of the world around them. From wanting to help other students grow to taking injury with stride, graduate center Ryan Norton perfectly embodies this description.

Norton is no stranger to the game of football, starting in the Mauldin, S.C., Youth Football League at the age of 12. Having stayed away from the game prior to the league, Norton’s first day on the gridiron was one to remember.

“I had no idea what I was doing,” admitted #58. “The first day of practice, we did the bull-in-the-ring drill and I was lit up, taking tackle after tackle. My dad told me the first time he knew I could play football was when I was repeatedly knocked down and continued to get up and kept on playing.”

Growing up in Mauldin, Norton grew fond of his home state and knew it would be the deciding factor for where he committed to play college football.

“I am a big supporter of the state of South Carolina. I love this state. I was born and raised here in South Carolina and I wanted to represent my state when I played college football. Whoever recruited me, I knew it would come down to Clemson or South Carolina.”

Norton knew his college decision would not be easy, as he was not always a Clemson fan. His father was a South Carolina fan, leading him to grow up loving the Gamecocks. However, Norton changed his mind the day he stepped foot onto the Clemson University campus.

“When I came here to Clemson, not only did they have a great football program, the whole campus had a family atmosphere,” explained the Tigers’ most experienced offensive lineman. “The people here are just different. It was a gut feeling I had when I got here. I fit in perfectly with the program and the surrounding atmosphere of Clemson.”

Norton has been a big reason Clemson has finished in the top 15 in the national polls each of the last three years and has finished those seasons with bowl wins over ranked teams who are all in the top 15 in college football history in winning percentage (Louisiana State, Ohio State, Oklahoma).

Norton was a starter on each of those last two teams and was a mainstay in the starting lineup both seasons. He has started the plays, whether it be Tajh Boyd, Cole Stoudt or Deshaun Watson receiving his snaps.

Entering this season, he had played 1,861 snaps, more than any other active Clemson offensive player, and missed playing just one of the 39 games. He had started 24 of the last 26 games over two years as well.

This year, he was to be the only returning starter on the offensive line and a leader of the offense. However, Norton was sidelined in his final season with three injuries in a row, a concussion and two knee injuries. His absence has admittedly been challenging.

Norton shifted his focus from what he is responsible for on the field to how he could positively impact his team in the wake of his absence.

“I try to watch and break down a lot of film from a coach’s perspective. That way when I’m at practice, I can tell my teammates things I have noticed that are helpful for them. They might receive the things I’m saying differently than the same thing said from a coach. Mentally, I’m trying to stay on top of it so I’ll be ready to go back in when the time comes.”

Norton’s injuries have also given him a new perspective on life after college and have allowed him to re-evaluate how he can influence those around him.

“The NFL will never not be a goal,” stated Norton. “Anyone who plays college football has dreams of going on to play in the professional league. However, the injuries I have faced have also brought me down and made me realize that I really want to coach.”

The help that Norton has received from different mentors throughout the years has shaped his life more than he would have imagined. He is hoping to go on and become a coach and teacher at the high school level so that he can instill a love for learning and change the lives of students.

“I really want to stay in South Carolina and help the schools here,” said Norton. “My ultimate goal is to become the best person I can be and the most influential person I can be to young kids, whether it be in sports or in the classroom.

“At the high school level, you can really mold someone’s mind and truly change their life. In high school, you are giving students the drive to go on and better themselves.”

While Norton continues to help his team from the sideline, he appreciates how the entire program came together to shape him into the man he is today.

“The whole point of this program is to mold men. If you’re here, you aren’t going to leave here the same person who you came in here as. Everyone goes to college to find out who they are as a person. This program has let me open up into who I think I should be and ultimately who I want to be. I wouldn’t trade this experience for the world.”

After being molded for the past five years, Norton wants to ensure that he leaves a positive impression on anyone he comes into contact with, something he credits to the program at Clemson.

“The people we bring into this program are not only great athletes, they have great character. That is why I respect this program more than any other program in the nation, because the character we bring in is unbelievable. It allows you to become the best man you can be, surrounded by the best people.”

So how does Norton hope to be remembered?