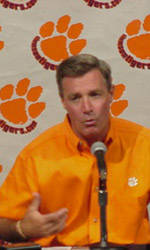 National tragedy “Right now the game is kind of insignificant and minute compared to what’s gone on in the last three or four hours. It’s difficult to concentrate and comment on a game during a national tragedy for thousands and thousands of people. Our prayers go out to the families. It’s unprecedented in this country.

Talking to the players “I am not an expert on addressing this kind of issue with the team. There are a lot of other coaches with a lot more wisdom than I have on addressing disasters with teams. There’s a fine line you walk when you deal with what has happened the last few hours because if you try to minimize this situation it looks like you have no compassion. I will address them to some extent before practice.

“When I was at Tulane there was a hurricane coming right at the city and they called for a mandatory evacuation of the city right after our game. Players dispersed and went everywhere. We had no idea when they were coming back and our next game. The first time I saw our quarterback was Tuesday and we found out he had a broken wrist. The first practice we had with our players was Wednesday night in the Superdome. I have been around a disaster where it caused disorganization and we had to deal with it, but nothing like the life and death situation we have today. Nothing compares to this.

Injuries “I said in the preseason that the thing I was concerned about most was injuries, that it would be our biggest enemy. I know in my career I can’t remember losing three starters for the year. With Marcus Houskin out and Altroy Bodrick out defensively you start getting thinner and thinner on defense. You have to rely on inexperienced guys and freshmen and then your mistakes, misalignments and missed assignments are going to be multiplied. Add to that Roscoe Crosby, who is probably out, and Kevin Youngblood, who has a broken leg, and you can see we have been hurt by injuries.

Duke “Defensively, they put a lot of pressure on the quarterback. Florida State tried to run the ball early on them and couldn’t. They make it difficult to run. Offensively, they have not scored a lot of points. But because of their background with the passing game, there were games last year where they were explosive and scored a lot of points. They always have that potential. They’re going to bring their “A” game and they could really make a statement by coming in here and knocking off a ranked team at their home.