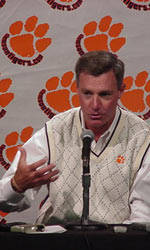 UNC Defense “I think Oklahoma and Florida State both had under 300 yards of total offense against them. Their defense is really good so I think consistently moving the ball on offense is going to be the key. Their team is playing with a lot of confidence and they’re starting to get some of their swagger back when they went 10-1 with Mack Brown. Defensively, they attack you. They pressure with their front four. They present problems for you. Their linebackers are pretty big and they can run.”

Facing Julius Peppers “You know where he is all the time. The problem is how much do you alter your package to account for him. We have to determine in the next few days how much we want to limit our offense to account for a very good player. It’s a fine line you have to walk. I’m sure they’re doing the same thing with Woody.

“It gives you more flexibility on offense if Akil Smith can have some success. He doesn’t have to win all the battles just the majority of them. It helps if you don’t have to leave a back in or leave a tight end in or run away from him. But not a whole lot of team have had success blocking him one-on-one. There’s no doubt that’s a key matchup.

“I’ve been around some great defensive linemen in my career at Alabama and Auburn and he is right up there with them.”

UNC’s Two Quarterback System “They bring a little bit different skills to the table. Ronald Curry’s scrambling abilities are similar to Woody’s. They’re running game with the quarterback is not as comprehensive as ours, but if he gets loose on the grass, he’s pretty dangerous. “[Darian] Durant reminds me of Shaun King’s (Bowden QB at Tulanet) running ability. He can hurt you running but not as much as Curry. He’s pretty even-keeled and mature for a red-shirt freshman. He’s accurate and he’s got some intangibles other than talent.”

Ben Hall “He’s got more speed than Todd McClinton. He’s got good hands and a lot of confidence. He’s a pretty tough guy for being a true freshman. He can get upfield in a short amount of time, which is what you must have in this offense because there’s no protection. He played basketball in high school so he didn’t get in the weight room a whole bunch in high school. Once he gets a little stronger we’ll put him in more blocking situations.”

Brian Mance’s playing status (Mance’s brother was killed in an auto accident Saturday evening) “I talked to his family and I’ll talk to them some more and let them make the decision on whether he wants to try and comeback or not. That’s a family decision. We just want to find out if it’s a yea or nay, a backup role or no role.”

Comparing Dantzler to other great players he has coached “Shaun King had some good games throwing the ball. But the things Woody does as a tailback, a dropback passer, with waggles and with the option, it’s such a comprehensive package. I’ve had a dominant tailback, an NFL tight end, a tackle, a wide receiver who was NFC Rookie of the Year. But again, this guy’s a tailback an option runner, a dropback passer with bootlegs and waggles and that’s what separates him from the pack. There’s never been anybody else in college that can do all that stuff. It’s hard to compare but nobody really dominates several facets as a quarterback like he does.”

Season to date “I think most of my conversations in the preseason were that we were going to be pretty thin on defense, injuries concern me more this year than any other year because of the talent dropoff. Then all of a sudden Kevin Youngblood went out, Altroy Bodrick went out, Marcus Houskin went out, Jackie Robinson, Roscoe Crosby went out. Then we got pretty beat up after the Virginia game heading into the Georgia Tech game. If you would have told me all that would happen in the preseason and asked would you be happy with a 4-1 record, I’d take it.”