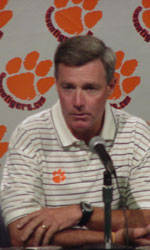 Goal against Wofford “Whether it’s Wofford, Florida State, Virginia or South Carolina, what you’re looking for is a player to improve his performance from the first week to the second week. I’m more concerned about the improvement of the players than I am about the score. We know the players and their talent level and we want to see how much better they can play this week. The margin of victory has been de-emphasized as far as the BCS is concerned. I’d like to see improvement by the team from week to week.”

How to measure improvement “For example, John Leake started his first game and had some busted assignments early. If he has less busted assignments against Wofford than he did against Central Florida then he had a good game. Missed tackles is another indication. We’ll grade the film Sunday looking at things like that and see if there was improvement. If we didn’t then we will have wasted a good opportunity that I’m sure will come back to haunt us when the competition picks up.”

Clemson’s Pass Rush “The pass rush was pretty good against Central Florida. We had three new starters in the secondary and I think once we tighten up in certain situations we’ll be in good shape. We’re eventually going to play somebody who runs the football more than they pass it. You can still do drill work to improve pass rush as far as coverage techniques. We go at each other a good bit in practice. Obviously there is less chance to improve this week because of the opponent.

Defensive Line “J.J. Howard merited some more playing time with his performance against UCF. He’s the fastest rush end we’ve got. He should have played more and I think Donnell Washington, DeJuan Polk and Moe Fountain are all going to play more. Regardless of the opponent, whether it was Florida State or Wofford, they were going to play more this week.

Run vs. Pass “We go into every game figuring we’ll just take whatever the defense gives us. Statistically, this offense has pretty much shown that over the last four years. We’ll go into this game with a predetermined idea of what we want to do, but they’ve had all summer to prepare and I’m sure we’ll see something different against Wofford. They’ve had three or four months to prepare and we’ll make an adjustment off of their adjustment.

Getting freshmen more involved We’re going to try and win the game like it is a normal opponent by alignment of personnel and numbers of personnel more so than saying we’re going to get such and such the ball. You look at what they play and attack the scheme or attack the numbers as opposed to trying to get someone the ball four times or get him three catches. We’re not going to do that.