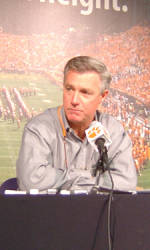 On his team’s intensity for the Boston College game: “Last week was a little different scenario simply because Florida State (by winning at Boston College) had given us a light at the end of the tunnel. Last week put us in the position where we could control our fate, so it’s a little different tempo for this week. I think the biggest thing this week is concentration. We have to make sure the enthusiasm is channeled toward absorbing assignments that will help us be productive on Saturday.”

On Clemson’s defensive front-four: “They played that way (with intensity) against Florida State and Virginia Tech in spurts. They had played bits and pieces of that, but never in a full game like we did against Wake Forest. We surely need a duplication of that effort again. It’s going to be important that we play with that kind of intensity.”

On the pressure to win: “We’ve had other games we’ve had to win. But again, I think winning this late shows great focus and concentration during the week. You really win the game throughout the week with preparation. The emotion will be there on Saturday. I think it showed last week that our guys prepared well. What the coaches were telling them was absorbed.”

On Clemson’s demeanor after two losses at midseason: “I saw a couple things from my team. Number one, against Georgia Tech, we had nine drops, four missed field goals, a blocked punt, and a fumbled punt return. I thought that could be corrected. I thought the special teams error against Virginia Tech could be corrected. We played well enough on offense and on defense to win that game. So, I think those were things that we could change, and for the most part, the staff and team did.”

On preparing for Boston College quarterback Matt Ryan: “We’ve got a scout-team quarterback, and it’s hard for him to imitate what Matt Ryan brings to the table. One of the things is the velocity and accuracy of his passes. We won’t be able to duplicate that. Our secondary is going to play coverage out there at practice today, Wednesday, and Thursday. I talked to the team about expecting more accuracy and velocity. He also brings height. He’s going to be more productive stepping into the pocket.”

On Clemson quarterback Cullen Harper: “It looks like statistically they (Harper and Ryan) have a very comparable season. As a junior, I think he’s getting the respect he deserves. He’s played 10 games. I think the level of a quarterback is consistency and doing it over a number of years will be something to watch. A lot of you have interviewed him and have seen his demeanor. He has a very consistent, even temperament. Sometimes that’s good and sometimes that’s bad, but in his case, he is not trying to be someone he isn’t. He’s sincere, and I think he’s good for our team. His demeanor is very similar to Charlie Whitehurst. Neither are vocal, but they are dependable.”

On the atmosphere for the game: “There have been several stadiums I walked in and there has been a thicker air than what you normally see. You could cut the electricity here during my first game against Florida State (1999) and then Georgia Tech last year. This one is probably going to bypass all of those.

“Both of us communicate at the line, and noise will be a factor in this game at some point and time. From our fan standpoint, if we kick off to them, it needs to be loud for their first possession. But they’ve got to tone it down when we get the ball because we communicate a whole bunch. From what I understand from talking to people, this might be one of the loudest, electric environments here in awhile. I think it will surpass anything since I’ve been here.”

On the leadership of the Tiger offense: “Chris McDuffie at times shows flashes of (vocal) leadership. I think it is important because some guys respond to vocal encouragement and others don’t. James (Davis) is a little more vocal. Therefore, there are certain members of the offense that it helps motivate. So, I think that has been very important. Cullen (Harper) motivates some through his quietness and James (Davis) motivates vocally.”

On Boston College’s defense: “Jamie Silva will knock your lights out, and he’s had a lot of interceptions. He’s kind of like the Anthony Waters of our team in the past. Their two inside guys are great run stopping guys. They get pretty good outside pressure. They have had some of their key guys hurt. (Jo-Lonn) Dunbar has been out a little bit. When you watch a team like Boston College defensively, they are really sound. They force things back and guys play with a low-pad level. But again, they are really solid. They are a heavy zone team, but they will bring some pressure.”