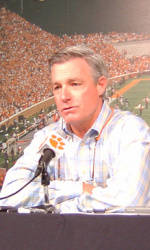 On how the Clemson vs. South Carolina game will be won: “A lot will come down to turnovers. In the game we just played (Boston College), we only had one turnover, but it resulted in (three) points and that was the difference in the score (20-17). Turnovers will be a factor. Turnovers, penalties, the kicking game, and not giving up big plays are several things that will determine the game, but I think turnovers will be the biggest thing.”

On the importance of playing South Carolina: “The #1 objective was to win the ACC championship. #2 was to beat South Carolina. Well, #1 is out, so #2 becomes #1. Anytime you have a rivalry, it is hard to relegate it to second-class status, but at the beginning of the year it was behind the ACC Championship. Once that becomes out of the picture, then you rival game becomes most important and that is what we have this week, our rivalry game with South Carolina.

On South Carolina’s bowl chances: “It’s more of an incentive for them to win. It puts more motivation on them because they may need to have the seventh win to make sure they qualify for a bowl game. I expect them to be prepared. They’re playing at home, it’s senior night, they had last week off so they have extra time to prepare, and they may need a seventh win to go to a bowl. All the check marks are in their favor.”

On talking to his team: “The things we have tried to talk about this year are what is important to us and what we can control. I don’t think it is so much about what we can prevent them (South Carolina) from doing. It is about what we can do for ourselves. We need to go out and play with the same intensity and battle that we played with last week. That’s the thing I’ve talked about more with the team. We need to get a ninth win. A ninth win would give us a better bowl opportunity and give us a chance to win 10 games, which hasn’t been done here in 17 years.”

On the rivalry: “One thing about a rivalry game is that statistics do not matter. You read the stats and they say that they’re (South Carolina) nationally ranked in pass defense, so one of the things we’re going to need to do is have success throwing the football. That’s what common sense would tell you, but being a rivalry game, you throw those things out the window. This game has been pretty intense, regardless of who wins. The biggest motivating factor for my team is the fact that this game is a rivalry.”

On Clemson: “The biggest thing I like about this team is that every week we show up to play. That’s why I think we will Saturday even though we’re coming off an emotionally-draining game. You know when the ball fell short on the field goal and there were double zeros on the clock, I think our players left feeling they had left everything on the field, and I think they pretty much have every game. Against Virginia Tech, we were down 31-8 at halftime and we fought back. We had some drops against Georgia Tech and errors that hurt us, but as far as playing with intensity, we have done that for 11 games.”

On South Carolina Head Coach Steve Spurrier: “I’ve always had respect for him. As I’ve mentioned several times, when he became the coach at Duke and didn’t keep the offensive staff, which I was on, a lot of guys would have taken that personally and gotten mad. But, I became the wide receiver coach at Alabama six months later, and the first place I went to visit was Duke because I wanted to learn. I think he is one of the best offensive minds. I’ve always studied him when he was at Florida and my father played against him. So, I know for myself there has always been a tremendous amount of respect for him.”