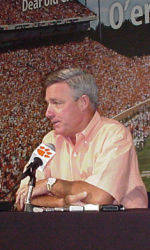 On playing Maryland: “I noticed when I listened to him (Ralph Friedgen) before the Florida State game on TV, he talked strongly about being able to run the ball and not turn the ball over. They’re solid on defense. They’re not turning the ball over, and they have a nice run package put together on offense, where they’re keeping their defense off the field. He’s had a lot of success and he’s recruited well. They’re 6-2, and I think their gameplan has worked well for them.”

On Will Proctor’s play against Virginia Tech: “He’s completed 53% of his passes his last three conference games, which just happened to be against some of the best defenses in the nationŠVirginia Tech, Georgia Tech, and Wake Forest. He’s a first-year player (in his fifth year in the program). He’s second in the conference in passing efficiency. He’s 7-2 overall as the starting quarterback. I’m being realistic and looking at his experience, what he has accomplished and his performance. His performance hasn’t been poor enough to merit a change.”

On the progress of backup quarterbacks Tribble Reese and Cullen Harper: “Tribble (Reese) and Cullen (Harper) have made tremendous progress. They’ve closed the gap, which we needed them to do. Those guys have practiced very well and have showed that they could be successful at quarterback.”

On execution: “There will be opportunities for Maryland to take our running game away. We’re going to have to execute the forward pass better than we have in the last couple of games.”

On Clemson fans: “Our environment creates a tremendous amount of electricity. It’s obvious when you watch our players come down the Hill and the amount of electricity built up from pre-game and the reaction of the fans. It elevates your emotional state, and I think that it is important that our fans create that atmosphere again, because our last three regular season games will be difficult.”

On Maryland’s defense: “He’s (defensive coordinator Chris Cosh) fairly complex in what he does on the front and coverage standpoint. They don’t play a whole lot of man (coverage), but when they do, they play a little zone behind it, similar to what Georgia Tech did. He doesn’t give you an opportunity for big plays. He challenges short throws. His corners are fairly aggressive. They’ve got a good package.”

On practice yesterday: “I didn’t get a bad feeling. We had a long practice with full pads. I thought they practiced well considering they had a three-day break. I surely couldn’t tell if they were ready, but I usually don’t know on Mondays as it is.”

On Chansi Stuckey’s performance at Virginia Tech: “I don’t think he was rusty. He had three catches and no drops. I was surprised at how well he came back and practiced and caught the ball well. That’s a highly-skilled position, and the hand-eye coordination involved with throwing and catching can sometimes take a while to get back. He worked on that a lot while he was injured (broken foot). I think his performance at Virginia Tech was successful considering it was his first game back from injury. He caught what we threw to him.”