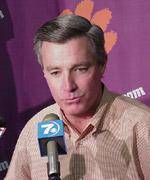 On the loss last week to Wake Forest: “In this profession, stuff like that is going to happen. We’ve got three games left. We’re sitting at 5-4 with three games left and we’ve played pretty well at times, so I can’t think of any reason the team would not bounce back and respond. I come to work when it’s dark and go home when it’s dark. I spend a lot of time preparing for the next game. We’ve got five days left until Florida State. That’s pretty much where all my time and effort goes. I try not to waste time thinking about the last game.”

On Saturday’s matchup: “I think this is probably the best opportunity we’ve had since 1999. They were down 23-0 against Miami. A lot of people probably thought they were on their way to another 8-4 season. All of a sudden they won the next week, and it’s all forgotten. That’ll be a similar scenario here. If we beat Florida State, then Wake Forest will be forgotten. Based on history, I think we’ve proven we can compete with them. Our players know they can play with them. Look at how well Georgia Tech played against Florida State, and how many opportunities Tech had to win the game. I think there’s another Georgia Tech performance in this team (Clemson) this year.”

On Florida State’s improvement on defense: “They’ve solved those issues from a year ago. I’m not sure statistically what they are, but they’re probably in the top five in about every defensive category. They’re second in scoring defense in the nation. They run a little less zone, a little more man. They’re more intense and confident.”

On the Bowden Bowls: “There’s obviously not as much media hype anymore. The first time ever between father and son in the history of Division I was all media hype. That’s kind of worn out now. In past years, I’d spend the first 10 or 15 minutes of the press conference answering that question. Novelty has worn off. The desire to beat them is still there. I’ve added four to his (his dad’s) total, that’s enough. Let somebody else add.”

On keys to stopping Florida State: “I don’t think there’s any doubt you have to stop the run, regardless of whom you play. This will be the same-case. I’d be more afraid of their running game than their passing game. We had a lot of trouble tackling Greg Jones last year. We’ll have a lot of guys playing who were in last year. Our players should remember him well.

I don’t know if he’s back 100 percent from his injury, but he’s had a very productive year coming off the type of injury he had. They have two or three guys that are all good though. Lorenzo Booker was the player of the year in the state of Florida is the fourth-teamer. Then they’ve got Willie Reid, who moved to wideout I think. In their mind, they’ve probably got about four starters with very little separation. They have different styles, but little separation as far as status is concerned.”