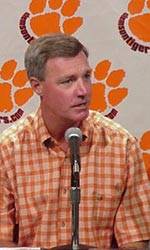 Head Coach Tommy Bowden met with the media on Tuesday for his weekly press conference. Clemson’s head man discussed a variety of topics including the passing of Jim Phillips, Middle Tennessee’s defense and more. Click to listen to the audio.

Opening statement on the loss of Jim Phillips: “There’s been a lot of history and tradition here at Clemson, and surely he was a significant part of it. If you mention Clemson football in modern history, you mention Jim Phillips. He’s been a part of this program for 36 years, starting with Frank Howard. I only knew him for four and a half years. He was very professional in how he handled his work. I’ve been with him through some wins and some losses, but there’s no doubt he bled orange. He’ll be deeply missed, and I’m sure by now he’s already found Frank Howard and they’re telling stories.”

Overall impression of Middle Tennessee: “The biggest obstacle for us will be that they spread the field and go no huddle offensively. Their quarterback has some escape ability and some running skills. It’s always difficult when you have to be careful about staying in your rushing lanes and keeping containment. We’re going to have to play very well defensively. We will have to create a pass rush. Offensively, we’ll have to be more productive than what we have been so far.

“I believe they played Alabama close in the fourth quarter last year (39-34 loss). They usually have to play their big games on the road. They’re a quality opponent, but just doesn’t have a lot of name recognition right now.”

On what he’s noticed of Middle Tennessee film: “I’ve been watching mostly defense up to this time. Their front four defenders are very athletic. They’re not as high profile as what Georgia’s was. But they’re comparable as far as physical bodies and pass-rushing skills, strength, size, and things like that.”

On the possibility of Yusef Kelly playing Saturday: “He was a little bit better but still did not do much yesterday. Today we’ll just see how much he can practice. If he can’t practice very much on Wednesday, then he’ll be doubtful or questionable. He’ll have to get heavy work tomorrow to be a factor Saturday. If he does very little today and tomorrow, he probably won’t be a factor.”

On developing the killer instinct: “You have to learn how to do that. It was discussed at halftime of the Furman game. It’s an acquired trait. Winning is a habit, losing is a habit. It’s a habit we haven’t learned yet, but hopefully we will. We’re hoping next time the response is more positive. It’s a team mentality. It’s more of a mental approach than anything.”

On the running game concerns: “The backs have run the ball pretty hard. I think we had 40 carries against Furman, and I want to say our longest run was 11 yards. Obviously that’s a concern, the big play. The long run against Georgia was 11 yards too. That’s two games where our longest run is just 11 yards. So that’s the biggest concern.”