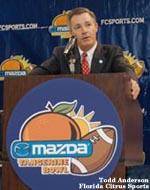 On the reward of going to the Mazda Tangerine Bowl: “It’s a nice reward after a season of ups and downs. In these games, the first objective is to win. The second objective is to reward the players. There is a fine line between balancing those goals. You’ve got to get out there in full pads and go hit. You’d like to take some extra time and get your red-shirt hard work. You would also like the players to have a good time. Orlando affords you that kind of opportunity.”

On playing Texas Tech for the first time in Clemson history: “Three things stand out to me about this matchup. The fact that you have a representative from an established conference with a lot of history means a lot. Then you realize that Texas Tech beat both Texas and Texas A&M. And on top of that, they’ve got a quarterback (Kliff Kingsbury) worthy of national attention. I think those things make this bowl very attractive. It will be good incentive for our team.”

On the Red Raider passing offense: “They have similar formations to us, but their line splits are unique. The difference during the course of the game will be the type of throws they make. They have more of a horizontal passing game as opposed to vertical. To throw it 50 plus times a game, a lot of it has to be horizontal because of the high percentage. Kingsbury completes a lot of balls. The only team we’ve played like that, as far as throwing that much on a normal basis, would be Louisiana Tech. The style of the game will be a lot different than anybody we’ve faced.”

On the biggest reasons for Clemson’s defensive improvement this year: “Most of our players from last year were back, and then the scheme change are the main reasons. We’ve gone from more of a man concept to the zone concept under John Lovett. We concentrate more on three and four-man rushes, while helping the secondary with underneath coverage. We’ve had some pretty good results against some good throwing teams this year.”

On the probability that Kelvin Morris will take over for Eric Sampson: “It won’t be too big of a change for Kelvin because the alignments and responsibilities are similar. There will be a lot of carry-over at Eric’s spot for Kelvin. With eight or nine days of preparation, he should make the transition fairly smooth. I’m pretty sure that the direction we’re going to go in is with Kelvin starting. Had he gotten here in January and learned the system, I thought he might have been more of a factor early this season. As this season has progressed, he’s learned more of his assignments and alignment. He’s a very talented player, and we’ve been happy with his performance. I look for him to have a good year next year, though.”

On the possibility of Charlie Whitehurst struggling with a long layoff: “I don’t think it will happen. He’s very mature for his age. You’re always concerned from a skill standpoint. I’m more concerned about the throwing and catching than his mental preparation or his ability to concentrate.”

On replacing defensive ends’ coach Rodney Allison: “What I’d like to do is accumulate a lot of information between now and Christmas. Then after Christmas I’ll sit down and do some background searches and make sure the resumes are checked. We can put graduate assistants on the road more and put one down on the field as well now that Justin Watts is also gone. He went with Rodney to UT-Chattanooga. I’m looking to replace him by the beginning of January.”

On Clemson’s improved secondary: “We’ve given our two corners more help in zone coverage. You can let them back up a little bit and get great breaks on the ball. Both of them, Justin Miller and Brian Mance, have outstanding speed and acceleration. We give them enough help underneath that it can make opposing quarterbacks try to throw over the top of them, but our corners have more reaction time in this scheme.”