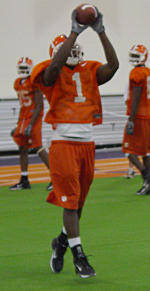 Tigers Work Out On The Fly Thursday

Clemson had a day of “changing on the fly” when it came to its practice schedule on Thursday. The team was originally slated to have a scrimmage in Death Valley, but heavy morning rains forced a change.

Head Coach Tommy Bowden moved his team to the indoor track facility where the team did calisthenics and other drills from 10:45 AM to 11:15 AM on its new indoor surface. The surface is 53 yards by 53 yards.

Then, the skies parted and the team resumed its practice in shorts, shoulder pads and helmets from 11:30 AM to 12:45 PM on the new artificial field turf on the Jervey athletic center practice fields.

The inclement weather has caused a change in schedule. The team will have a normal two-a-day practice schedule on Friday, followed by a scrimmage on Saturday. All practices are closed to the public.

“We would not have gotten nearly as much work in had we not installed that field turf,” said Bowden. “It really made a difference and we got a lot accomplished. Even with all the rain we had there were no traction problems and there were no new injuries. This field turf has been a tremendous addition to our facilities.

Bowden then previewed what he would be looking for in Saturday’s scrimmage. `”I am anxious to see how the kickers work, especially the new ones. I will also be taking a close look at the young offensive tackles (Barry Richardson and Akeem Robinson) and will be watching the running backs to see if there is any separation between Yusef Kelly, Reggie Merriweather and Kyle Browning. I will also be interested to see the unity and cohesiveness on defense.”

Additionally, free safety Roy Walker will have surgery to repair a torn ACL on Friday and he will be out for the season. Jamison will have surgery to repair his broken arm. Reports have stated that Jamison will be out as many as six weeks, but he plans to be back by the first game. “I like Vontrell’s attitude, we will just have to see how he progresses after this surgery,” said Bowden.