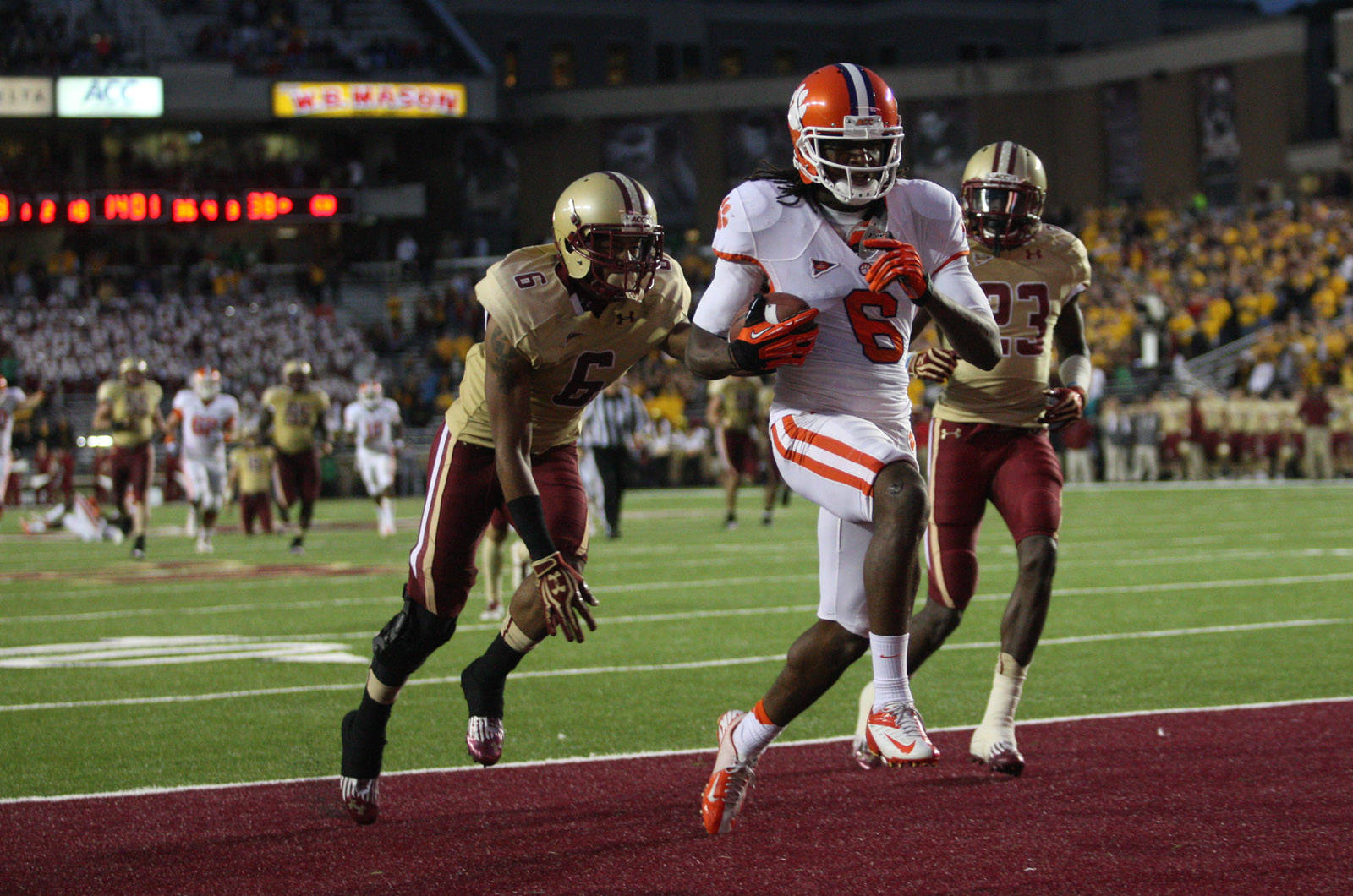 CHESTNUT HILL, MA – It was another record-setting night for Clemson’s passing tandem of Tajh Boyd and DeAndre Hopkins on Saturday, and more importantly for the Tigers, a crucial win in an environment that had not been kind in recent years.

“Our guys responded all game long, so I’m just really proud of them,” Tiger head coach Dabo Swinney said afterward. “We did a lot of good things individually. But one thing I would say is I thought we really grew up defensively in the second half.”

As Swinney alluded to, the Clemson defense made two crucial stops late – an interception by reserve corner Garry Peters and then a pass broken up by Travis Blanks on the Eagles’ final possession – to seal the victory.

“Coach (Brent) Venables told me I was going to start the second half, and I was kind of nervous,” Peters said, “but I went out there and I knew the defense had my back and I made some plays.”

It wasn’t all positive for Clemson’s defense, but it always seemed to make the plays that mattered most – recording a season-high three sacks, intercepting two passes and holding the Eagles to just seven of 21 conversions on third and fourth downs.

As has often been the case, however, it was the offense that set the tone. Clemson rolled up 576 yards of total offense, led by Boyd, who threw for 367 yards to go along with the three scores, and Hopkins, whose 197 receiving yards broke the record of 182 by Rod Gardner against North Carolina in 2000.

“That’s just a goal on my list that I have,” said Hopkins, who had also set the school’s single-game record for catches with 13 in the season opener against Auburn. “I feel like I’ve got to give thanks to Coach (Chad) Morris for calling the plays and putting the ball in my hands and giving me the chance to make those plays and have these records.”

Boston College opened the scoring at the 10:16 mark of the first quarter, as Andre Williams found a hole in the Tigers’ defensive line and outran the secondary for a 30-yard touchdown.

But, the Tigers got on the scoreboard less than three minutes later on a 28-yard field goal by Chandler Catanzaro – his 16th consecutive successful attempt – to cap a 12-play, 77-yard drive.

After Clemson’s defense got a three-and-out, it took its first lead of the day with 3:02 to go in the opening stanza on a six-yard run by Boyd, and extended its lead to 17-7 when Boyd hit tight end Sam Cooper for a 15-yard touchdown on the opening play of the second quarter.

BC trimmed Clemson’s lead to 17-14 midway through the quarter, going 92 yards in eight plays and finding the end zone on a three-yard pass from Rettig to Johnathan Coleman with 7:49 to go in the first half.

After a Tiger three-and-out, BC took its first lead since its first possession, as Rettig found Amidon across the middle and he raced into the end zone for a 31-yard score to make the score 21-17 with 4:04 to go until halftime.

But, Clemson responded by marching 76 yards on 13 plays and going back ahead 24-21 when Boyd found Brandon Ford in the front corner of the end zone for a four-yard score just before the half.

Rod McDowell opened the second-half scoring with a 16-yard burst to put Clemson up 31-21. And three possessions later, Andre Ellington extended the Tiger lead to 38-21 on a one-yard dive over the line, made possible by Rashard Hall‘s interception inside Boston College territory.

The Eagles struck back quickly, however, as Rettig got the Tigers’ safeties to bite on play action and hit Amidon over the top for a 42-yard scoring strike that made the score 38-28 with 35 seconds to go in the third quarter.

The Tigers responded in short order, however, as Boyd went deep to Hopkins for a 35-yard touchdown and a 45-28 lead with 14:00 left. The touchdown pass was the 49th of Boyd’s Clemson career, moving him into a tie with Charlie Whitehurst atop the school’s all-time list.

Nate Freese cut the deficit back to 45-31 with 9:18 to go on a 39-yard field goal, and after the Eagles stopped Clemson on downs on the ensuing possession, they drove as far as the Tiger 14 and looked poised to cut the lead back to one score.

Instead, Peters stepped in front of a Rettig pass at the 12-yard line to seal the deal, for all intents and purposes, with fewer than 6:00 to go.

“My first career interception, it felt real good,” Peters said. “The D-line got some great pressure. The guy kind of got me on that route earlier, and I felt like I couldn’t let him get me again, so I jumped it and I caught it and it felt real good.”

Hopkins broke Gardner’s record on the second play of the ensuing drive, dragging his foot near the sideline for a 17-yard grab that gave him 197 for the game.

After a Tiger turnover, freshman defensive back Blanks put the finishing touch on the victory, batting away a pass on a fourth-and-four play at the Clemson 28, and Clemson’s offense ran out the clock on the game.

The win was just Clemson’s second ever at Alumni Stadium, and the game was the seventh Clemson has played away from home in its last nine dating to last season, the first time it has had such a stretch since 1967-68.

Now, the Tigers will have five of their last seven at home with road games at Wake Forest and Duke still to play this season.

“We’ve got Georgia Tech this week, and it’ll be a big challenge for us back in the Valley,” Swinney said. “I like where we are right now. We’re 4-1, and hopefully just a team that’s going to improve and get better.”